Mujahedin Khalq Organization was founded in 1960’s, to overthrow the US-backed regime of the Shah of Iran but it took it 45 years to turn in to a religious cult of personality. 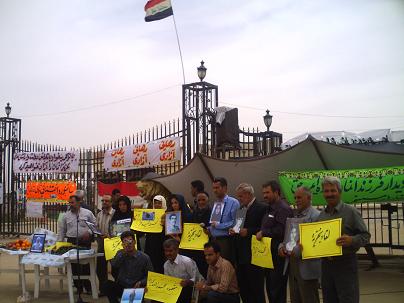 Once mujahedin chanted the slogans for "Liberation of Iranian Heroic People", and viewed people as their main resource, its leaders, on top position Massoud Rajavi deviated in order to stand against those very people including families of Ashraf residents.

Why is Rajavi so terrified of families visiting with their children? Why does he enter the course personally to insult the families as "regime’s chained dogs"?

If MKO’s members, according to Rajavi, chose the struggle willingly, why would he fear visiting their parents?

The true fact that Rajavi tries to deny is that the motivations on which MKO war based in 1965s, are no more existing.

In his message of April 29th, Rajavi speaks of the so-called heroic people and the ransom they should dedicate:"How simply we can speak of paying for freedom of people and country but it is too hard to act".

Indeed, the treasons the Rajavis committed against their compatriots have left nothing for MKO. Once they chanted the motto "Without Iran, I don’t want life, today they hang the slogan "Without Ashraf, I don’t want life" on Camp Ashraf gates! Today MKO leaders are resisting against Iranian people.

Massoud Rajavi points the flesh of his attacks on families, why? The answer is laid in MKO’s cult like practices. Maryam and Massoud Rajavi have turned the members into robots who have no free will and no individuality.

Some time ago their love to country meant taking weapons and chanting slogans, according to them but today their love is limited to the piece of land denoted to them by Saddam Hussein. Their love to parents and family have replaced by love to Massoud and Maryam Rajavi. All this defines a "cult of personality".

MKO members have been living in a bubble called Camp Ashraf. They have been manipulated and deprived from emotions and affections for more than two decades.

Massoud Rajavi knows that the spell of his cult’s amputation is family and normal social relationship. Once a member is among his family, far from the cult’s propaganda, the bubble is ruined and the member’s eyes will open to a new world full of love and affections.