Since the gathering of the families of MKO victims and captives before Camp Ashraf, Mojahedin media as well as advocates have staged a new round of propagation and have repeatedly asked the mass media and reporters from all over the world to cover Camp Ashraf news for the world to 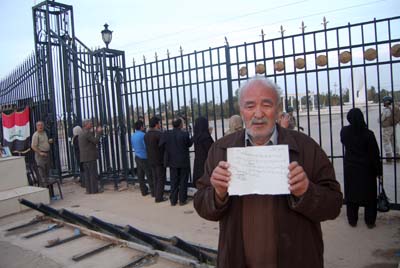 be informed of what is happening therein. But is it really sincere in what is advertising? A review of BBC’s report in 26 April, basically in Persian, discredits all claims made by the organization as well as the truth of the statements made by the family of MKO members made in their nearly three months of gathering before the camp to let the world hear their cries of protest against the most blatant form of the modern slavery and to see and release their children and beloved ones from the clutches of the terrorist organization.

BBC report starts with a sight of a big lock on the gate of Ashraf and the starting point of the text is “No one is to open the doors; all cries are uttered in vain”. Then the father of an Ashraf resident tells the reporter “It is for 22 years that I’ve received no letter of my son”. Some MKO members managing to escape from Ashraf are quoted as saying “Mojahedin high rankings prevent members to leave camp by means of intimidation, threat, and coercive measures”. And BBC reporter expounds on the reaction of Ashraf officials, stating: The gates of the camp are closed on the reporters too and despite we have called Mojahedin authorities inside camp many times, there is no answer to our questions. Finally, BBC refers to the main challenge of Ashraf victims and its solution: ‘The US recognizes Mojahedin as a terrorist organization yet it has some advocators among American and European politicians and lawmakers who defend the survival of camp Ashraf in Iraq. Now the basic question is how long the few advocates of Mojahedin are to victimize thousands of innocents and their families for their own interests? There are some points to be mentioned on the BBC report.

The report approved the fact that despite the dissemination of Mojahedin and inviting mass media to camp Ashraf, the organization has so far refrained to welcome the reporters’ presence and answering their questions. Instead, it refers to the gathering before the camp as a propaganda show staged by the Iranian regime and calling people and reporters Intelligence Ministry agents swarming at the front gate of Ashraf by the collaboration of the Iraqi Prime Minister’s Office. The report has some shocking scenes illustrating the oppression and injustice of Ashraf high rankings imposed on MKO victims, their families and children and focuses on the gap separating Ashraf from the family of its residents as well as the baseless claims of Rajavi on the point that Ashraf residents have remained there at will and its doors are open for those willing to leave and other lies fabricated by him for killing time and victimizing more members. There is no need to interpret the tearful eyes of an eight-year-old girl who has never seen his father since she was born. The BBC report contains justifiable and significant points to convince the global community, international humanitarian institutions and mass media to be concerned about the blatant violations of human rights and international rules by the leaders of a blacklisted terrorist cult that respects no convention, law and domestic legislation. Here are some suggestions that may well help avert further violations of human rights by the organization and possible release of the enslaved members.

1. The international organizations are supposed to send their independent delegates to Iraq to be informed of the events inside and outside Camp Ashraf directly if they ever care for human rights and justice. It may prevent victimization of more MKO members used as human shields in Ashraf. Mojahedin advocates can make a descent visit of camp in order to get at the truth.

2. The Iraqi Government has done its best in order to prohibit any human disaster inside Ashraf. It is the best position taking on the part of the government after the bloody conflicts of June 2009 in proving its goodwill toward Ashraf residents. According to BBC report, the Iraqi police are just trying to preserve order in the region maintaining neutrality, yet Mojahedin leaders insist on developing a violent atmosphere by means of assaulting and battering the family of Ashraf residents located beside camp. The best solution at the time being seems to be the direct interference of international organs and bodies; otherwise, any negligence in this regard may result in negative consequences that in no way vindicate any concerned organization and body.

4. The fact that a number of Ashraf residents escaped from the camp to join their family may reveal that the organization has kept MKO members inside camp by force. The presence of the concerned international institutions may facilitate the free exodus of the captives. Any delay in this regard may impose irreparable costs on the voluntary split of members and encouraging the leaders to continue with the human tragedy ultimatums.

5. The presence of a number of families before Camp Ashraf, that has emboldened some insiders to the escape and also disclose the true notorious nature of Mojahedin, may emphasize the necessity of the presence of other families to save their children. Undoubtedly, Ashraf officials cannot bear the existing conditions forever. As mentioned before, the first step for the dissolution of Camp Ashraf is by rendering the organization helpless through a striking split therein and this is the best time for breaking cultic relations of MKO to set the members free. The supports of the families may pave he way for releasing their children from the firm clutch of Rajavi.

6. The interaction of the families with the media is of a high significance. It may deprive Rajavi of his lever of fabrication and distortion of the truth as well as trying to win the sympathy of the world by putting the bargaining chip in the hands of the families as it was revealed in the blind and hysteric backlashes of Mojahedin against BBC report. In a nutshell, Rajavi and Ashraf high rankings have reached a stalemate and the persistence of the present conditions may lead to their full destruction in the near future.