It seems that the four month-long gathering of the families who have been asking to meet with their relatives held in Camp Ashraf has paralyzed the organization as the leaders never anticipated the prolongation of the gathering. The families’ established camp just in front of 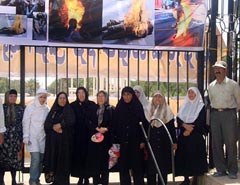 Ashraf, regardless of the harsh condition they are facing, indicates that they are determined to rescue their enslaved children and relatives from the mouth and claws of the terrorist fiends. But the orchestrated propaganda blitz by MKO appears to have beguiled some unaware world organizations whose only source of information is the organization itself.

Released by MKO’s media, the World Organisation Against Torture (OMCT) has announced its concern about the residents in Camp Ashraf on June 3. In some part it reads “In recent months, its residents have reportedly been subjected to orchestrated harassment carried out jointly by Iraqi authorities and the Iranian regime. Since February 2010, dozens of individuals, purporting to be family members of the residents have been assembled at the Camp’s main gate, where they have been shouting profanities and threatening another violent attack”.

As a globally known terrorist cult that respects no ethics in its political and social demeanor, MKO has a repute of having problem with conventional values and whatever secures the coherence of human relations and hardly one can encounter and hear terms like family, father, mother, wife, husband, son and daughter in its lexicon as they are all dangerous threats to its integrity. While it brainwashes members that they have to sacrifice them all to reach higher goals and to fulfill the organization’s greater aimed causes, it offers no answer to the question that what is the good of a human society totally devoid of love, passion, attachment and whatever human values that differentiate him from animals.

The mere chanted slogans of defending women’s right, although it is another ploy to be recognized a pro-democratic campaigner, does not signify that it believes in what it chants. What are really the rights of women it tries to defend? Is it their right to be deprived of the greatest responsibility the nature has endowed them? What happens to the world if there are organizations like MKO that just consumes the young males of a generation? Even Adolf Hitler that sent millions of people to their death did not ignore women and the pivotal role they play to preserve man’s race: “The sacrifices which the man makes in the struggle of his nation, the woman makes in the preservation of that nation. What the man gives in courage on the battlefield, the woman gives in eternal self-sacrifice, in eternal pain and suffering. Every child that a woman brings into the world is a battle, a battle waged for the existence of her people”. And what has been the reaction of the leaders and some certain organization and advocates of MKO to the cries of the mothers gathered before the gates of Ashraf demanding to see the ones they have brought into the life? It is not so hard a task to identify if the gathered “individuals” are “purporting to be family members of the residents”.

The families are doing what they have to as their duty towards their children, but more has to be done. It is also a responsibility on the concerned humanitarian organizations that are watching the predicament surrounding the families, a number of whom are old, in front of Ashraf. Their only demand is to be granted their rights, the heavenly endowed rights that men have arrogated.