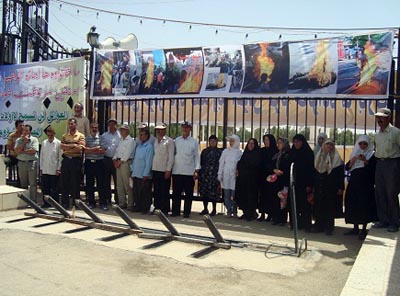 (Families have been picketing for the past 4 months)
For over four months the families of Rajavi’s hostages in Camp New Iraq (formerly Ashraf) have been picketing outside the gates of the camp demanding the right to meet with their relatives
During these four months they have asked for help from all the major international agencies concerned with the camp; UNAMI, ICRC, UNHCR, etc, including the American Ambassador to Iraq, Christopher Hill. So far, despite their clear humanitarian case, no help has been forthcoming.

Now in a bid to force the families to give up and leave without meeting their loved ones, Massoud Rajavi has devised a plan to single out each of the hostages whose relatives have come to find them and one by one sit them in front of a camera to swear at and abuse their own families as well as the Iraqi government. Sadly, the hostages inside the camp have spent over two decades incommunicado and have had no contact with the outside world through media, telephone or the internet, and have certainly had no contact with their families in all that time.

Following is one of the forced video sessions broadcast by the Washington-backed terrorist cult leaders in which Mohammad Karimi has been made to sit before a camera without his military uniform, he is seated somewhere like a gymnasium inside the garrison. His speech is marked by MKO-speak and cult jargon as he swears at and insults his own sister and the Prime Minister of Iraq. Karimi claims that he is at war with Iran and that Iran’s leader (Ayatollah Khamenei) and the Prime Minister of Iraq (Nouri Al Maliki) have been defeated simply by him sitting inside the camp and refusing to see his sister.

We should not forget that these people have been used and exploited by Rajavi and Saddam for over two decades. When Rajavi and his wife (co-leader of the cult) ran away just before the arrest of Saddam, they abandoned these people to be used as hostages and bargaining chips. Now over seven years after the fall of Saddam Hussein, these people are still kept incommunicado and are imprisoned in the camp by the leaders of the cult with the backing of the USG and its agencies in Iraq.

Any right minded person can see that the problem for the camp and Rajavi as its leader is not whether they want to engage in political activities or not (in that case the first step would have been to escape self-imprisonment in the deserts of Iraq), but their fear of the families and human rights activist trying to make contact.

Rajavi must answer to the outside world why no marriage is allowed among members, why no children have been born to any members for twenty years, why there are not even newspapers, or radio, no TV, no telephone or email to contact the outside world, etc. Why do those who have managed to escape the camp all report severe human rights violations against the people stuck inside without any recourse to help or contact?

The backers of Rajavi and other remains of Saddam’s era (especially, the infamous Ros-Lehtinan in the US House of Congress, Struan Stevenson in the European Parliament and Robin Corbett in the British House of Lords) should hang their heads in shame for supporting and endorsing such severe abuse of human rights of hostages in front of the eyes of their families.

As examples of such broadcasted forced videos is that of one of the victim hostages, Mohammad Karimi tortured to sit in front of a camera and play as instructed, including swearing at his own sister whose only ‘crime’ is that she has been sitting outside the camp for the past four months hoping to see him.