We urge you to put pressure on Mojahedin Khalq, aka: MKO, MEK, NCRI, Rajavi cult

You may know that the leadership of PMOI, after blind and costly assassinations , escaped from 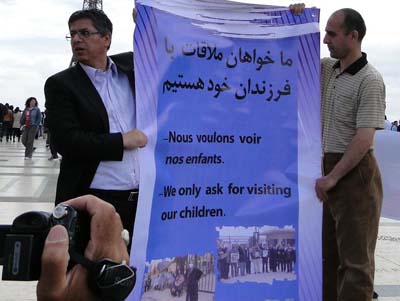 Iran and he transferred his organization to Iraq territory which was in war with Iran at that time, and he began his military and terror apparatus again in Iraq with the assistance of Saddam Hussein, the dictator of Iraq.

That time Iraq was in war with Iran and as a result of the war , Saddam Hussein supported them financially and equipped them militarily and fed them by serious and confidential information, in return pmoi became Iraq’s Army mercenary and functioned as Iraq’s fifth column.

PMOI has preserved and kept its forces in a camp ,named Ashraf , which is an Iraqi military garrison ,close to city of KHALIS , and up to know no foreign viewer and proctor has succeeded to supervise their function and attitude regarding their subordinates and members , as a result of that they behave whatever they like and they ignore the basic rights of their forces.

Seven years ago , Saddam Hussein and his government was toppled , but even after the downfall of Saddam Hussein ,PMOI still act like before and there has not been any breakthrough in pmoi’s policy regarding separation of their members.

Your Excellency , with this preface we would like to draw your attention to this fact that we the backers and supporters of the Seminar , Support of the Rajavi’s castle victim’s families (Ashraf Garrison-Iraq) which occurred in Paris on 19th of June /2010, are separated and victimized members, critics and families of those stranded victims in Ashraf garrison who have a brother , sister, father or mother and friends in there who are under severe indoctrination and brain washing methods .We had been in the same situation as they are now ,but we could set ourselves free from all those indoctrinations and brain washing methods and fortunately we gained our freedom by separating ourselves from this organization, and now after gaining our freedom, together we want to help the other victims who are still kept in Ashraf Garrison and pmoi’s main headquarters in Paris .

Your Excellency we , the families and friends and separated members urge you as honorable representative of United States government in France to step forward and put pressure on PMOI to allow the victim’s family to meet their loved ones and also we would like you to help Iraqi government to facilitate the families’meeting with their loved ones.

Preventing any meeting between families and their loved ones is a serious breach and violation of human rights.

We urge and entreat you to help us in this just and humanitarian matter .

Relevant departments in EU and Iraq
Other Relevant recipients