Voice of America TV held an interview (broadcasted in Persian) on July 17 with Mohammed Mohaddesin, chairman of the foreign affairs committee of the French-based terrorist Mojahedin Khalq Organization (MKO, MEK, NCR, NLA, PMOI) to discuss the recent ruling of the U.S. Court of

Appeals for the District of Columbia. Also not an unprecedented action by the VOA, the interview with the member of a designated terrorist group is of such high seriousness, looking at it as a direct violation of law, to consider and talk about it.

VOA in its programs, especially broadcasted in Persian, has always insisted that its doors are open to all organizations and legal entities as well as individuals and personalities and welcomes them to defend themselves for whatever has been said against or in their favors in broadcasted programs. But the right is followed with a proviso that none of the terrorist groups and entities are permitted to avail themselves of such right as it might lead to an act of propaganda in their favor. Despite such a claim, so reasonable and sound decision as it seems, VOA is itself the first to violate the set standard and the rule, as an organization that presents the US government, when it conducts an interview with a ranking

member of a terrorist group. No need to say that VOA is well aware that to what extent has acted in opposition to violation of its claims or in accordance to the principles of the freedom of speech. However, in this respect, Jamshid Chalangi’s Program hosting a ranking terrorist raises some questions for which Mr. Chalangi must provide convincing explanations.

First, as Mr. Chalangi asserts in his program, when holding the interview with Mohammed Mohaddesin, MKO is referred to as a designated terrorist group on the State Department’s list. Even if in future the group should be removed from the list, VOA has now acted against its adopted media principles and claims. Of course, it is not unprecedented as mentioned before and VOA has acted as an easy platform for the presence and voice of this terrorist organization to reflect itself under a variety of aliases.

Second, as reiterated and emphasized by the program’s host, the name of MKO remains on the State Department’s list despite remarkable shift in the attitude of some regional governments, institutions and a large number of European states. Mr. Chalangi avowed that “well, it was not only the US state Department […] Ther were also European governments and states. There are some countries in the region, some among the present Iraqi Government, that still consider MKO a terrorist organization”. Thus, is not VOA flagrantly mocking the international community and the intended countries by acting outside of the rule and openly holding the interview with the ranking terrorist?

Third, the host in reaction to the comments of Mohadesin states that “The U.S. President has simultaneously recognized, and does, the Islamic Republic of Iran as a state sponsor of the international terrorism. Then, how is it possible that it has placed MKO on the list as a shift towards the policy of appeasement while it considers the Islamic Republic a sponsor of terrorism?”. On the one hand, he tries to acquit America of currying favors with the Islamic Republic, and on the other hand he means to stress that America’s position against MKO is for other reasons. As a result, for the very same reasons that America enumerates the Islamic Republic a terrorist sponsor, the designation of MKO cannot be purely used as a tool for political causes and for sure relies on other mechanisms. Therefore, what gives Mr. Chalangi the right to make VOA a mouthpiece of MKO?

To define its mission, the VOA charter reads that “The long-range interests of the United States are served by communicating directly with the peoples of the world by radio”. And to be effective, “VOA will serve as a consistently reliable and authoritative source of news. VOA news will be accurate, objective, and comprehensive”. Unlike the made claims, VOA acts in absolute contradiction and its paradoxical attitudes tell something different. How can it be reliable when it hardly shows any respect for its audiences’ common sense? It will be good for Mr. Chalangi if he could explain the paradoxical behavior even in brief. Still, the silence of VOA makes it an undeniable fact that it is a media mainly following a policy of quantity rather than rule-based principles. 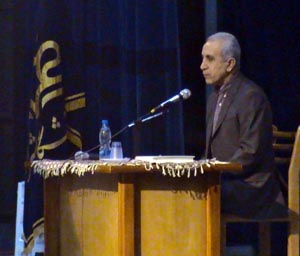 Whoops! What a big gaffe in the US report!