…The day after the bombing of Islamic Republic Party office, Mr. Abbas Davari and Mr. Azdanloo [two MKO members] came to see me. I asked them if they had bombed the IR Party office. They 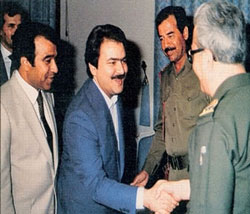 told that they hadn’t. I had already issued a statement to condemn that attack, the same day. I asked them the question because I was looking for a reason to accept Mujahedin’s alliance with our foundation. […]

When they declined the responsibility of that bombing, I posed some questions to answer so that I could decide what to do. The questions were about independence, freedom, the position of a political organization in society, the position of MKO in the society, the method of thinking in MKO – if it was like the past, a mixture of other ideologies?- if MKO was ready to accept critics on its ideology. They brought me the answer. They said that they had admitted the entire questions I had written […]

We are supposed to go to MKO’s safe house where we can learn about the changes they claim in their thinking method. If I make sure that the changes are serious; if they admit to the critics they are faces; if MKO becomes an organization with the objective of freedom, not the objective of power, I will manage to let them be a member of NCR. They bring me a book called Explaining the World. I read and correct it page by page. Then Mr. Rajavi comes to see me. I find out that the house belongs to his first wife [Ashraf]

I told Rajavi that we want nothing for the future. We don’t need any state and we just want to be political activists. Rajavi promises to make all changes in their ideology in order to adapt it with the freedom objective […]

[…] I tell Massoud Rajavi :" I cannot trust you totally, power addiction will not leave people easily […] I hope that you really act in accordance with what you say."

We manage to write an act based on three basic principles: Independence, freedom and lack of hegemony. I define these three principles: Any organization to submit to these principles, accepts that the objective of the struggle is freedom not power […]

One day Rajavi came to me and told that we had to communicate with states in order to be recognized as an alternative. I replied that the states were seeking their own benefits and we had nothing to do with them […]

[…]An hour later Mr. Rajavi came to my room and told that Mr. Tariq Aziz had asked to visit him […] I told him:" Now that you accepted to visit him, you should treat him the way our Iranian Emperor Shahpour the first treated the Roman Valerian. Our Emperor humiliated the invader to our country. He [Tariq Aziz] should understand that he had invaded a country which has national pride. You should notify that and you shouldn’t let the visit last more than half an hour." […] He said "Ok, I will" but instead of behaving like what he was supposed to, the meeting lasted 5 hours so that the following day Le Monde newspaper wrote that Mr. Tariq Aziz bought Mr. Rajavi or something like that […] after that visit, Rajavi’s behavior changed and changed …