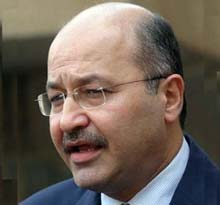 "Basically, reports on presence of MKO members in Kurdistan are unfounded and sheer lie. We intend to establish joint security with our neighbors and we do not want that Kurdistan be turned into a region for enemies to reach their ends," Salih told ISNA. "We neither interfere in internal affairs of our neighbors nor we are interested in meddling of our neighbors in our internal matters," he continued.

"Kurdistan has been turned into a safe region in Iraq since collapse of regime of Saddam Hossein (former hanged Iraqi President). Kurdistan’s regional government has amicable and secure ties with neighbors and it has been turned into a connection bridge among regional nations. Turkey, Iran and Iraq are doing much of their business through Kurdistan."

The MKO group is dramatically notorious in Iran for having sided with Saddam Hossein during the 1980-1988 Iraqi-imposed was on Iran.

The terrorist group has also claimed responsibility for numerous terrorist attempts and the assassination of significant figures in Iran over the past three decades.

The Mujahedeen Khalq Organization is blacklisted as a terrorist group by Iran and much of the international community.