Mr. Sepehri announced his separation from the MKO cult in Feb. 22, 2011 in a statement.Mr. Sepahi spent nine years in Rajavi’s cult. He could release himself and arrive in free world two years ago.

In part of the Statement of Seperation he declares:

When I asked for leaving Ashraf I was threatened to be imprisoned in Ashraf for two years and then I would be handed to Iraqi forces who would in turn jail me in Abu Quraib for eight years and finally I would be exchanged with Iraqi prisoners of war and would be delivered to Iranian government. Thus I remained in damned Camp Ashraf for nine years. ..When I declared my eagerness to leave the camp, first they tried to flatter me. Then they held numerous meetings for fourteen days but I succeeded to flee all their traps and released myself. In 2009, I could reach Europe by help of my family. Today in Feb. 22, 2011, I declare my complete separation from Mujahedin Khalq. I’m thankful to my God who helped me arrive in free world, live a free life and decide for my own future. I hope that my bitter experience will enlighten others who are at risk of being captured by such a terrorist destructive cult so that they won’t lose the best period of their life. 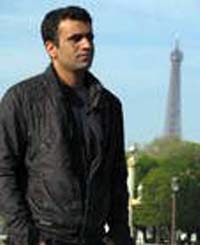