An article in today’s Wall Street Journal looks at the considerable support that the exiled Iranian Islamist-Marxist cult Mujahideen-e Khalq — which is designated by the U.S. State Department as

a foreign terrorist organization — has been able to cultivate, both in European capitals and in DC, getting people like Rudy Giuliani and Howard Dean to speak at their events.

The article notes that these speakers “wouldn’t disclose their speaking fees, but many of them charge between $25,000 and $40,000 per appearance.” Dean also said that “he has made both paid and unpaid speeches for MeK.”

As I noted back in December, such activities skirt very close to violating U.S. law in regard to “material support” for terrorism. Responding to this charge when it was raised by attorney David Cole, Giuliani and his colleagues quoted the relevant law: “Individuals who act entirely independently of the [FTO] to advance its goals or objectives shall not be considered to be working under the [FTO]’s direction and control.”

“As a result,” Giuliani et al concluded, “we felt quite secure, thank you, in relying on the protection Congress placed in the statute, backed up by the First Amendment.”

But can Giuliani and others really be said to be “acting entirely independently” of the MEK if they’re getting paid explicitly to advocate on their behalf?

That question aside, the MEK is clearly ramping up its lobbying effort here in DC. Yesterday, the Washington Post ran a full page ad calling on State Department ed-list the MEK. The ad claims that the MEK is “Iran’s principal opposition movement,” which would surely come as a surprise to Iran’s actual opposition movement.[..]
The Washington Post ad was paid for by the National Association of Iranian Scholars in Britain, which is listed as one of a number of MEK aliases by the Iran Interlink website, run by former MEK members.

Also yesterday, the Washington Times ran a pro-MEK ad of a different sort, in the form of a ridiculously misleading op-ed by Daniel Pipes. “The MeK issue reveals Iraqi subservience to Iran with special clarity,” wrote Pipes, suggesting that that the Iraqi army’s recent violent entry into Camp Ashraf north of Baghdad — where MEK members have lived since 1986, protected first by Saddam, then by the U.S. — was done on Iran’s orders.

While I appreciate the fact that neocons like Pipes have awakened to the fact of Iranian influence in Iraq (enabled, of course, by the U.S. intervention), the idea that Iraqis should need special Iranian encouragement against the MEK is amusing. The MEK fought alongside Hussein’s forces after the 1991 Gulf War to put down the Shia uprising in Iraq’s south and the Kurdish uprising in the north, driven by MEK leader Maryam Rajavi’s infamous command to “Take the Kurds under your tanks, and save your bullets for the Iranian Revolutionary Guards.” Given the significant Shia and Kurdish presence in the new Iraqi government, it should come as no surprise that that government is not positively disposed toward the MEK.

The question of what to do with the residents of Camp Ashraf — which includes a number of children — is a tough one, but it should be separated out from whether they should be taken off the terrorism list. Barbara Slavin had a very good piece in March, looking at the delusion of some high-profile MEK supporters that the U.S. could support them as a credible Iranian political opposition force. It’s clear that some would like to treat the MEK as an Iranian version of Ahmad Chalabi’s Iraqi National Congress. Responding to that comparison yesterday, Kombiz Lavasany wrote via Twitter, “In Chalabi’s defense, not sure Iraqis knew or cared about him. Everyone in Iran just hates the MEK.”

A Mob Rented for the Cameras 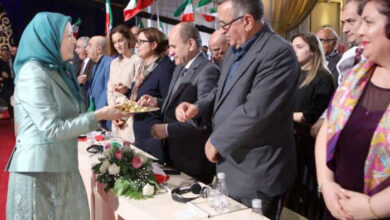