Former New York mayor Rudy Giuliani is reported to be in contention to be Donald Trump’s attorney general or secretary of state. Senators who will be considering his confirmation may want to examine the fact that Giuliani took money to advocate on behalf of an Iranian dissident group while it was listed by the State Department as a foreign terrorist organization, potentially breaking the law. 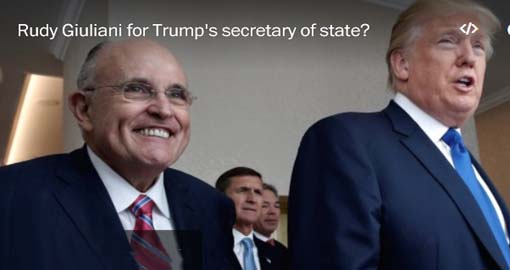 For years, Giuliani has been one of the most prominent American officials to advocate on behalf of the Mujahideen-e Khalq (MEK), a Marxist Iranian opposition group that claims to be the legitimate government of Iran and resembles a cult. A Treasury Department investigation in 2012 examined whether speaking fees paid by several MEK front groups to a long list of U.S. politicians, including Giuliani, violated laws on Americans receiving money from designated terrorist organizations.

The State Department added the MEK to the list of foreign terrorist organizations in 1997 due to its involvement in the killing of U.S. citizens in Iran in the 1970s and an attack on U.S. soil in 1992. The group, which has about 3,000 members living in exile in Iraq, has not conducted a confirmed act of terrorism in more than a decade. In the aftermath of the U.S. invasion of Iraq, the United States mostly disarmed the MEK and provided its members with protection at their Iraqi base, Camp Ashraf.

Throughout the first term of the Obama administration, Iranian American organizations with extensive links to the MEK paid prominent U.S. national security officials to speak on behalf of the group. They also contributed heavily to the campaign coffers of lawmakers on both sides of the aisle. The payments ran through the lobbying law firm DLA Piper, which passed the money through a speakers’ bureau that cut checks to the officials.

In 2011 and 2012, Giuliani gave several speeches, including at events inside the congressional office buildings, calling on the State Department to take the MEK off of the list of foreign terrorist organizations. He also heavily criticized the U.S. government’s effort to help relocate MEK members when the Iraqi government evicted them from Camp Ashraf.

In March 2012, Giuliani traveled to Paris to speak at an MEK conference alongside the group’s secretive leader Maryam Rajavi. While there, he called the U.S. military base in Iraq where the United States wanted to relocate the MEK a “concentration camp.” Those comments later appeared in an MEK ad in the New York Times.

That same month, the Treasury Department’s investigation into the payments made to American politicians became public when former Pennsylvania governor Ed Rendell admitted that he had received a subpoena related to his work on behalf of the MEK. It’s illegal for American citizens to do business with a group designated as a foreign terrorist organization.

During a pro-MEK protest and rally outside the State Department in 2011, Rendell told me he had received $20,000 for his appearance there. How much money Giuliani received per appearance is unclear, although he spoke on behalf of the MEK several times in 2011 and 2012.

Representatives of several of the front groups, which have names like the Iranian American Citizens of Northern California, have maintained that they have not broken any laws.

At the time, top State Department officials often complained about the U.S. politicians who were advocating for the MEK, calling their interference unhelpful and misguided. The American supporters of the MEK were increasing tensions between the U.S. government and the MEK while negotiations were ongoing.

“The Americans who ought to know better and claim to be on the side of good solutions are really damaging it. Either they are too lazy or too arrogant to actually do their homework. They don’t spend the time to learn facts, they just pop off. They accept the MEK line without question and then they posture,” one State Department official told me in 2012.

In October 2012, after the MEK finally relented to State Department pressure and moved to Camp Liberty, Secretary of State Hillary Clinton decided to remove it from the foreign terrorist organization list. What happened to the Treasury Department’s investigation after that is unclear.

The MEK story is complicated because the group does have legitimate grievances and has been the target of deadly attacks by Iranian-backed forces inside Iraq. There are also reports that the U.S. and Israeli intelligence services have used the group’s members at various times to conduct covert operations inside Iran.

Giuliani and the other MEK supporters’ argument that the group is the victim of human rights abuses and deserves protection from atrocities is valid. But by profiting from their advocacy while the group was a listed terrorist organization, they may have broken the law.

And if Giuliani really believes that the MEK could represent a viable alternative to the current Iranian government or a even a key pillar in U.S. policy on Iran, his potential tenure as a national security official in the Trump administration will mean a new and uncharted era in U.S.-Iran relations.

MEK to push US for another war 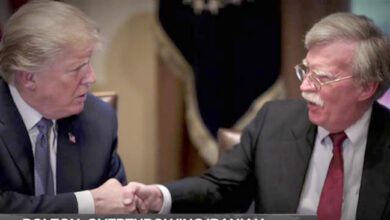 The MEK’s Man inside the White House 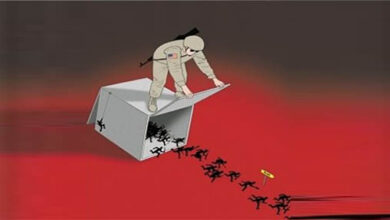 PMOI is no democratic group