On Monday September19, Mr. Darius Balafkandeh joined his family, Nejat Society, Gilan branch reported. Mr. Balafkandeh was warmly welcomed by his family who were awaiting his return for years. 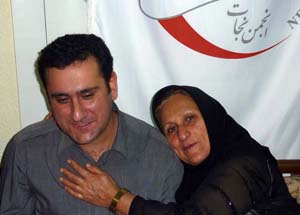 Embraced by his mother, he said with watery eyes:

“The MKO is nothing but a liar. Since the moment I decided to flee the strictly controlled system of Rajavi, I tried to reach Iraqi forces protecting Camp Ashraf with great difficultly. I was welcomed by families picketing in front of camp Ashraf. I have to say bravely that when I faced Iranian officials at the Embassy in Iraq, I was surprised to see their humanly kind treatment toward me. I found out that I had been influenced by Rajavi’s indoctrination and forced presence in the group. I had only heard lies during those years. I am really embarrassed now.”

Darius’s mother was really moved by visiting her son after many years of waiting. She was crying kissing and hugging her son. She was thankful to the God for she could see her beloved son before her death. She hoped that other families could be able to see the return of their loved children to home and motherland.

Nejat Society also hopes the release of others held imprisoned at Camp Ashraf.