Sunday voiced deep concern about the violation of human rights in the main stronghold of the anti-Iran terrorist Mojahedin-e Khalq Organization by the MKO ringleaders.

"The members of Camp Ashraf have been deprived of their most basic human rights which have been recognized by all the world countries and the international bodies," the rights group said in a letter to the representative of the UN Secretary-General in Iraq, Martin Kobler.

The letter underlined that the members of the MKO who are imprisoned in Camp Ashraf are being brainwashed by the ringleaders of the group on a daily basis, are obliged to divorce their spouses and cut relations with their friends and family members.

It also referred to the terrible conditions of women in Camp Ashraf, and said the female members of the group are forced to choose a single life.

Women are fooled by the group’s leaders to feel a need for surgery but then go under hysterectomy unknowingly, the report said, adding that over 150 women have already had hysterectomy in the Camp.

The report said the ringleaders of the cult believe that once women undergo hysterectomy, they will be devoid of female sentiments and better suit the goals and activities of the group.

A defected member of the MKO had revealed in March that the female members of the group had been living under captivity for more than 25 years and were not even allowed to appear in public places alone.

And only a total of 10% of the married members have been allowed to have children, he added..

The defected member mentioned that since 1989 the MKO has deprived its male and female members of the right of marriage, meaning that they are not allowed to form a family and the children of those members who had married before 1989 were taken away from their parents and sent to the European countries.

"After 15 years of imprisonment in Camp Ashraf and tolerating various tortures by the agents of the group, I managed to escape from the Camp and surrender myself to the Iraqi security forces," he added.

Also, a November 2010 report by the Habilian Association, an Iran-based human rights group, said that under the direct order of MKO’s Ringleader Maryam Rajavi, the ranking members of the terrorist group in the Camp of New Iraq (formerly known as Camp Ashraf) do not allow members to receive medical aid and treatment, healthcare and other services unless they provide the group’s leaders with given levels of cooperation.

Based on the order, the dissident members are deprived of medicine and other medical services or, at least, face much hardship and difficulty in procuring their necessary medicines.

The rights group added that the new measure came after protests remarkably increased inside the group, specially in the camp. Right groups are gravely concerned that a large number of MKO members may lose their lives soon if UN, human rights and Iraqi officials do not force the group leaders to end their tortures and pressures against the dissident members.

According to an August 2010 report by the Habilian Association, the MKO leaders have increased their pressures and control over the members of the terrorist group to prevent possible defection and escape by unsatisfied members.

MKO ringleaders have ordered the camp guards to stage snap inspections of the group’s members and their personal belongings under the pretext of finding the lost weapons. 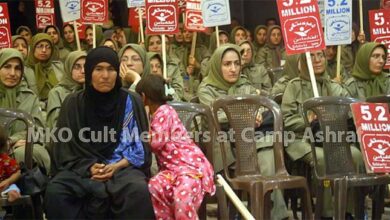 Iran’s Chameleon Splinter Group: The MEK’s Will to Power

MKO not able to whitewash its bloody history- Part2