My name is Mahmoud Rostami. I was born in 1966.i joined the Mujahedin Khalq in 1988. I escaped camp Ashraf on September17, 2011. I mean I was imprisoned in Ashraf for twenty-two years. 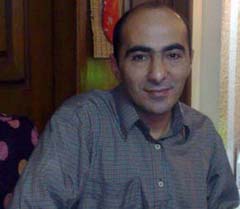 Whether intentionally or unintentionally I wasted the best and the most sensitive part of my life in the MKO but I’m very happy that I could finally find the free will and the power to make decision. I owe my freedom to many people especially my Mom who came to Ashraf gates, behind the fences and I had the chance to hear her voice and recognize her.

In fact, the fate of Ashraf residents includes a very bitter part of Iranian history. From the bottom of my heart, I wish the release of all individuals who are mentally and physically imprisoned by the organization. I hope that they find a way to get rid of this dirty, superstitious and poisonous propaganda they’re stack in.

This is not our fatal destination to be a toy in hands of a capricious person who ruins all human values. There should be an ending point for Rajavi’s and his supporters’ dirty game. They should be brought to justice before Iranian nation.

I really wish that any Ashraf residents in any rank or position would have the free will to think freely and choose for his fate.

End of 2011
After I left Camp Ashraf, I thought that I should leave everything behind me and think of a new life in the free world. But I was wrong.
I left Ashraf 41 days ago. I can swear that I almost all the time think of the fate the rest in the camp. I am concerned about their situation in the early January 2012.
As it was proved by experience, it can be imagined what will happen by the end of 2011. Again, the same as it happened in June 2009 and April 2011, a number of residents (of course more than the previous times) will be left dead. Then photos of dead and injured ones will be published on TV and newspapers accompanied with protests by personalities from all over the world as well as judicial and human rights interpretations that are nonsense.

They always delay the solution until after the problem gets crucial. Why, these incidents are inevitable? Is it really impossible to stop such incidents occurring again? Why the case of Ashraf has got so complicated?

I’d like to tell you a story of what happened this year in April 2011:

Among residents who were killed in Ashraf, in April, there was a young man named Morteza Beheshti. He was so good that once you got acquainted with him you would never like to stop the relationship. He was a noble, modest and really good-tempered guy. He always used to smile and talk very sociably.

Morteza had a brother named Milad who is also an Ashraf resident. Following the killings on April 17, as usual Maryam and Massoud Rajavi would praise the dead and injured members. This way they tried to motivate other members who were still alive.

Morteza had a heart-breaking death. Everyone was moved by his death. No one cared what Rajavi said. But Rajavi is skilled in abusing people’s emotions.
A few months after that date, I was standing guard in western side of the camp. I saw a young girl among the families who were picketing behind the fences (who were usually insulted and stoned by residents according to what they were ordered by commandants). She was carrying photos of Milad and Morteza. She looked so distressed and sad. She said,” for god’s sake, call me any name you like, call me “Criminal”, ”Henchman”, ”Intelligence Agent”, ”Mercenary”… just let me see my brother Milad for 5 minutes.”
Looking at such a scene would make any dignified human being upset. I myself automatically thought of my own sisters. After that, I would think about that woman for hours so I deeply doubted what Massoud Rajavi claimed as humanity.

There was only barbed wire and tears of a young girl who wished to visit her brother for only five minutes.

May God, history and society judge them?

We can prevent such bitter fates from happening. This story should be ended once forever. Our history is full of revolutions and revolutionary struggles as well as deviations and treasons. I swear to God, that the current path of Ashraf is not that of a struggle. Such situation is not chosen by Ashraf residents at all. This is only the result of mistakes and deviation made by a single self-contended individual who is supported by the West.

As a person who has spent 22 years of his life in Ashraf, I can assert that all Ashraf residents realize everything but they are imprisoned there.