Majeda al-Tamimi MP: "Removing the Mojahedin Khalq organization from the list of international terrorists disregards the blood of the victims" 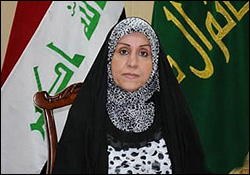 National Alliance MP Majeda-Tamimi announced that the attempt to remove the name of Mojahedin Khalq Organization from the American list of international terrorists is an insult and disregards the blood of the victims who died at the hands of this gang.

Speaking to the reporter for Ashraf News, Majeda al-Tamimi asked international organizations and human rights organizations to come to Iraq and to identify the huge amount of crimes that were until recently carried out by this group in order to implement their own agendas, which led to them killing a great many civilians. Any attempt to remove the name of this organization from the list of terrorism is equivalent to [condoning] what was done against Iraq and its people.