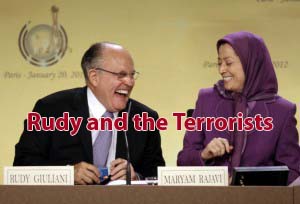 ­Mujahedin-e Khalq, also known as MEK, is a former radical Islamic-Marxist movement, labeled a “cult” by Human Rights Watch and listed by the US State Department as a Foreign Terrorist Organization, alongside Al-Qaeda and Hezbollah.

It is also embroiled in a US political scandal for allegedly making illegal payments to retired US politicians.

Yet Giuliani believes the US government should put its might behind MEK, which is currently based in Iraq.

Although officials in Washington have openly accused Iran of trying to acquire nuclear weapons, President Obama has so far called for a diplomatic resolution. And while some in Israel and the US have advocated limited military action to disable Iran’s uranium enrichment facilities, Republican Presidential candidates Newt Gingrich, Mitt Romney and Rick Santorum have all called for the Iran Regime to be overthrown.

But none of them have campaigned for MEK to lead the revolution.

The MEK has forsaken its anti-Western and radical Islamist roots, and promotes itself as a secular, democratic government-in-waiting – to its Western backers. But at its base in a refugee camp in Iraq it enforces strict discipline – celibacy, limited sleep, no electronic communication, forced divorce for married members, and a personality cult surrounding its leader Zohreh Akhyani[Nejat Society note: the so called leader of MEK is now Maryam Rajavi as his husband Massoud is in hiding]. Human Rights Watch has accused it of severe human rights violations.

Meanwhile, the US first placed it on the terrorist list in 1997 over fears that it might attack American citizens, and as recently as 2007 it claimed MEK was a terrorist organization despite its formal renunciation of violence against civilians.

But despite its dubious credentials, MEK has proved almost irresistible to a whole slew of nominally respectable US politicians. Among them former UN ambassador John Bolton, presidential candidate Howard Dean, and former Homeland Security chief Tom Ridge, who’ve all made speeches in favor of the MEK.

But a recent investigation initiated by the US Treasury Department discovered that the MEK was paying its supporters lavish speech fees in the tens of thousands for several minute-long talks extolling its virtues. It has already subpoenaed several former officials including former Pennsylvania governor Ed Rendell.

If it turns out that they received money from MEK, they will be in contravention of US legislation prohibiting anyone – never mind top political figures – from receiving funding from terrorist organizations.

Considering Giuliani’s long history of ostentatious support for the MEK, it is not beyond the realms of possibility that he is next to be investigated. Aware of this, in his Paris speech he brushed off the investigators, saying they "don’t frighten me, won’t stop me.”

Nonetheless, MEK have launched legal action in US courts, to be taken off the terrorist list, provoking an angry reaction from the State Department, which doesn’t want the courts to dictate who it considers a potential national threat. In his speech Giuliani accused "cowardly sources in the State Department or elsewhere” of “unknowingly doing the bidding of the mullahs [the current regime in Tehran]."

If as expected, the MEK legal campaign fails, and Giuliani’s long-rumored financial links with the MEK are exposed, the nation will wonder how the man considered a national hero for his response to 9/11 has become closely associated with a terrorist organization.