The U.S. State Department stepped up its warnings against an Iranian group to leave a camp in Iraq, saying its status as a blacklisted foreign terrorist organization could hinge on whether it complies. 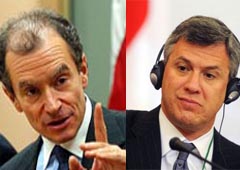 U.S. officials speaking Friday on a conference call said the group, Mujahedin-e Khalq, or MeK, has to vacate Camp Ashraf in Iraq by July 20, following orders from the Iraqi government to get out.

Almost 2,000 have left, relocating to a temporary facility at Camp Hurriya, while the remaining 1,200 or 1,300 have stayed put waiting for the Iraqi government to act on various demands, officials said.

“It is past time for the MeK to recognize that Ashraf is not going to remain an MeK base in Iraq,” said Ambassador Daniel Benjamin, State Department coordinator for counter-terrorism, on the call. “The Iraqi Government is committed to closing it, and any plan to wait out the government in the hope that something will change is irresponsible and dangerous.”

More coverage of the conference call is available here, here and here.

MeK was named as a terrorist entity by the State Department 15 years ago for its alleged role in assassinating U.S. citizens in the years before the 1979 Islamic revolution in Iran, and for allying with Saddam Hussein against Tehran.

It renounced violence in 2001, and has since engaged in an aggressive legal and lobbying campaign in Washington over the past two years — enlisting officials from both major political parties – to win its removal from the State Department’s list.

A federal appeals court last month asked the State Department to review the group’s status and give a definitive answer by October. Reports earlier this year indicated a move to de-list the group was underway. But officials said Friday that the group has misinterpreted the court’s ruling.

“MeK leaders appear to believe that the Secretary has no choice now but to de-list them. That conclusion is quite plainly wrong,” said Benjamin.

Benjamin reiterated remarks from Secretary of State Hillary Clinton that leaving Camp Ashraf will play a key role in her determination on whether the group will remain on the list of foreign terror organizations, and that this was their best chance at removal.

“This is the MeK’s moment to show that it has taken on a fundamentally different character. It should act quickly and complete the relocation and close Camp Ashraf,” said Benjamin.

Shahin Gobadi, a spokesman for the National Council of Resistance of Iran in Paris, of which the MeK is the main member, said in a statement the group never misunderstood the ruling, and that subjecting the de-listing to vacating Camp Ashraf defies the law.

“Had there been any justification for making such [a] connection, the U.S. Federal Court of Appeals [for the] D.C. Circuit would have considered it in its June 1 ruling,” he said.