The leader of Mojahedin’s cult claims that he’s fighting with religious tyranny for the freedom of Iranian people.

Apart from MKO’s struggling method that is full of pure terrorism, “freedom” is only a word the MKO has employed to cover its ugliness.

It’s natural that the one who has ugly mind and heart tries more to use a heavier make-up to hide his ugliness.

One of MKO’s biggest lies concerns “freedom”, that’s in contradiction with the nature of the MKO. This system (MKO) itself is completely tyrannical, in which low ranking members have to obey unquestionably.

People needed several years to understand the sectarian nature of this cult and see how it uses violence to suppress the mind.

What revealed MKO’s permanent opposition to the freedom of thought and speech was a press conference on MKO-Saddam relations and the role of this group in suppressing Kurds and Shittes in 1991; this conference was held in London.

In this conference, the MKO used all its agents to prevent revelations; on this day, they forgot all their claims on “freedom” and showed their anger of disclosure of realities.

MKO agents, deployed from Netherlands and France, accused participants of being the agents of the Islamic Republic ministry of intelligence. In addition, they disrupted questioning and answering process, threatening and attacking journalists.

They even insulted the journalists, calling them Iranian agents; even, VOA’s correspondent was beaten by MKO supporters when she was leaving the place.

By such violent suppressive behavior against political opponents (during past 24 years in Europe), MKO proved that it isn’t even familiar with “freedom” and that they will leave no one alive in the case of getting to power in Iran. Their physical confrontation with reporters outside the current regime proves that they will resort to executions in their own regime.

Does it mean that the MKO, during all these years, has been trying to replace Islamic Republic with its “Modern Islamic Democratic Republic”? 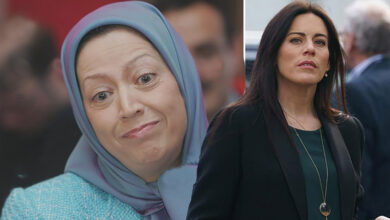