A Letter to Martin Kobler: On MKO’s Defiance to Relocate 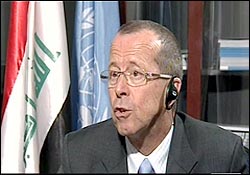 The Special Representative of the Secretary-General for Iraq

As the families of the victims, members and the ex-members of Mujahedin Khalq Organization, MEK/MKO/PMOINCR, we appreciate your humanitarian efforts to put an end to the predicament of the group’s enslaved members both in Camp Ashraf and those relocated to the Temporary Transit Location TTL. We understand that you look at the issue from a humanitarian point of view and to put an end to the plights of men destined to suffer for the atrocities plotted by others, but MKO is buying time trying to politicize your humanitarian effort. From the very beginning of the reached agreement to relocate residents in Ashraf, MKO leaders were seeking for unjustified excuses to either hinder the process or bring it to an abrupt halt, and it seems they have succeeded. Furthermore, through all this six-month long extended period, the Iraqi government and the UN have tolerated MKO’s cavils and its raised objection to any presented solution.

MKO complains that facilities at TTL are far from meeting basic living necessities and calls it a prison and detention center, whereas reports from UN monitors indicate that the quality of life at TTL even exceeds accepted humanitarian standards. MKO’s leadership obstinately refuses cooperation and places preconditions and makes demands, whereas the Iraqi government has shown cooperation with the UN and even delivered a cargo convoy of goods as demanded by the group on July 15. The leaders turn down the UN presented “roadmap” on claims that it sidelines and ignores the residents’ rights and endangers the security of residents, whereas the roadmap has been designed to address the concerns of both the residents and the Iraqi government by suggesting a series of steps to complete the peaceful relocation of residents.

And MKO did not hesitate to wage a psychological war against the UN, UNAMI you just following the presented “roadmap”. A passing look into a variety of MKO-run and fed webpages discloses a blatant gesture of defiance against the international guideline which is blasted by numerous advocates who, by disregarding the ethics in words, act as the group’s mouthpiece. One after another they have questioned impartiality and humanitarian intention of the UN in an attempt to defend MKO; they openly condemned your remarks calling them sheer lies that have further complicated the problem instead of providing any solution.

As a result, you have been added to the list of MKO opponents acting as elements of pressure on behalf of the Iraqi government, claimed to be itself taking orders from Iran, and collaborating to set the stage for a human tragedy and massacre. So, it was not a sudden shock to read Alejo Vidal-Quadras, chairing the MKO’s alias International Committee of In Search of Justice (ISJ), strongly denouncing your reports and making suggestion for your replacement: “ISJ would like to reemphasize the need for appointment of an objective and competent personal envoy by the Secretary General to Ashraf and Liberty so that all issues could be addressed in a fair and unbiased manner.”

Although a strong antagonism towards the UN, you and other cooperating sides, all this ado MKO makes serve for a different purpose. Frankly speaking, the dispute is not merely over a simple matter of relocation from a camp to another; the problem is MKO is reluctance to leave Ashraf and is still under the utopian delusion that it can impose its stay in Ashraf. The ideal solution MKO appreciates is the one that disapproves any relocation from Ashraf. The group is well aware of the fact that relocation from Ashraf means a permanent expulsion from Iraq sooner or later. But staying at the small utopia they built, even if seemingly in limbo, means a permanent or decades long stay until they will be delisted from the State Department blacklist and be received by other countries.

The problem is that MKO is inherently pessimistic, and as Winston Churchill explicates, “the pessimist sees difficulty in every opportunity”. You have provided the group with many opportunities but the only received responses have been insurmountable difficulties and unjustifiable excuses that will never end. And the problem is that the UN’s policy of peaceful cooperation to stop a human tragedy has further emboldened MKO to wrongly misconstrue the attitude as the Iraqi government and the UN’s capitulation to its demands and that, they have no other choice but to submit to its wills. And the sole victims of this battle are the residents themselves whom Rajavi seems to be determined to preserve as human shields to construct a secure bulwark against a global decisiveness. Here are, as people well acquaintance with tactics of the group, a few suggestions that may help in your humanitarian mission:

– When you draw up guidelines or make decisions concerning MKO, be determined to put them into action before publicizing them. Inaction further hardens MKO’s attitude against any compromise and temporizing prompt it to bring unto scene a considerable capacity of its advocacy network to thwart efforts.

– A consensus is needed among the sides cooperating to end the crisis. The Iraqi government and people have also rights and demands that have to be respected and accounted. MKO, for instance, complain of water and electricity shortage and ask to be connected to Baghdad’s networks. The fact should be observed that such shortages are natural to meet because of the infrastructural deficits that fail to satisfy the demands of the people in the area. Furthermore, it should be noted that closure of Ashraf does not mean closing a military bastion but returning the seized lands to people they belong to.

– The right for the families of the residents to meet them has to be recognized. Both the families and residents are deprived of a free meeting that will grant them the opportunity of breaking the walls that your efforts have thinned.

– We appreciate your peaceful, humanitarian solution to the issue of relocation. But urging the Iraqi government publicly to “refrain from violence under any circumstances and to be generous when it comes to the humanitarian needs of the residents” further encourages MKO to be antagonistic without being questioned or criticized for its warlike attitude.