Mujahedin, Running out of excuses

Another date has come and gone after Massoud Rajavi – through his wife Maryam – agreed that the next group of MEK members would transfer to Camp Liberty on 23 August. Of course, 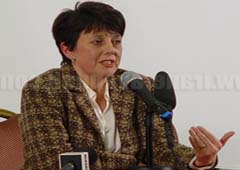 welcome as such statements of intent are, there are many considerations which need to be taken into account before such a move can be undertaken. Not least of which is that there exists an accountable, humanitarian process for transferring these people which needs to be in place before they can be moved. This process is reliant on the scrupulously proper procedures detailed by the UN working in conjunction with the Iraqi authorities. Certainly there will be nothing to prevent the movement once these procedures are in place. It will only depend then on the MEK leaders being true to their word and allowing the individuals to be moved. The arrest of MEK spokesman Mohammad Eqbal for deliberately obstructing this process must send a clear message to the MEK leader Massoud Rajavi that he must comply the with legal requirement to allow these people to leave Camp Ashraf.

Alas, so far the MEK continues to mire the process with unwarranted prevarication as the MEK leader persists in making his unreasonable demands; demands designed to cause confusion and frustration and to attempt to provoke disagreements and recriminations between the Iraqis, the UN and international observers.

The MEK leader says two things must happen before anyone else moves.

His first demand is a delaying tactic. Rajavi says that conditions in Camp Liberty must be improved – in spite of it being judged to meet internationally agreed standards. A Washington Times report quoting Mr Tahar Boumedra, the former human rights chief at the U.N. mission in Baghdad who resigned his post in May accused Martin Kobler the UN Special Representative for Iraq of deliberately covering up ‘prison like conditions’ at the camp.

Jared Kotler, New York-based spokesman for the U.N. Department of Political Affairs, which oversees the U.N. Assistance Mission for Iraq said, “It is regrettable that such a distorted picture is being presented of the efforts of the United Nations in Iraq to resolve peacefully the situation of Camp Ashraf”. Mr. Kotler said the U.N. mission under Mr. Kobler’s leadership had worked “diligently and impartially to facilitate a peaceful solution that respects the rights and concerns of both the residents and the government of Iraq.”

“These efforts are one of the main reasons why this very tense situation has not already spilled over into further violence,” he added.

Tahar Boumedra was a well known character in Iraq during his tenure there. He enjoyed friendly relations with the MEK and was one of very few outsiders who were allowed inside Camp Ashraf. After leaving his post in Iraq, flights and accommodation have reportedly been paid by MEK supporter, R.Bruce McColm, President of Global Initiative for Democracy, as part of a campaign to advocate for the MEK.

The second of Rajavi’s demands is that the MEK must come off the US terrorism list. There are a host of reasons behind this demand. The most important of which is that Rajavi believes this to be key to the continued longevity of his group.

Rajavi’s worst fear is the inevitable dissolution of his cult. This long term problem is still ongoing partly in the form of natural attrition of forces. As residents of Camp Ashraf have been moved to Camp Liberty, they are offered a glimpse of the normality of the outside world. Several have taken advantage of this and voluntarily walked away from the group to take refuge with the Iraqi authorities. A major problem for Rajavi is that during the UNHCR refugee determination interviews in which the residents of the camps are being assessed for refugee status, it is made clear that in order to qualify for refugee status the individual must renounce membership of the MEK. Rajavi is being advised wrongly if he believes that delisting the MEK as a terrorist entity will allow individuals to maintain membership of a political group and qualify for refugee status. He needs to ask for clarification of the legal requirements for assigning refugee status. Certainly delisting in the US will not affect the situation of individuals in Iraq.

More importantly however Iraq citizens demonstrated recently against the continued presence of the MEK in their country. The Iraqi government has reiterated their demand – the MEK cannot be regarded as anything except a terrorist organisation and they must all leave Iraq. Iraqis claim that the delays and game playing are all aimed at eventually taking the group off the US list and that this will lead to pressure on the Government of Iraq to keep the group there. The Iraqis argue that any such move would be irrelevant and that Iraq will always regard the MEK as terrorists because of its past history and its current behaviour. The MEK’s current behaviour is a clear case of interference in the internal affairs of Iraq should not be tolerated by mediators like the UN or US or EU.

The Iraqi government spokesman Ali al-Dabbagh said however that delisting the MEK in other countries would allow these countries to receive the former members as refugees.

Author of the books "The Life of Camp Ashraf (Mojahedin-e Khalq – Victims of Many Masters)" and "Saddam’s Private Army".