As preparations get underway to deport all Mojahedin Khalq (MKO, MEK), one Rajavi cult victim set himself alight in Camp Liberty

According to a security official in charge of the protection of Camp Liberty near Baghdad, a 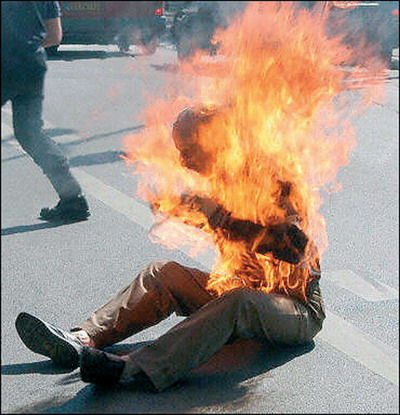 veteran member of the Mojahedin Khalq terrorist organisation (known as the Rajavi cult) set fire to himself at dawn this morning.

The official reported that a man named Shahram Mohseni set fire to himself in protest at dawn today (Sunday), adding that although Mohseni suffered serious burns to his legs and back it had been possible to save his life.

Officials at Camp Liberty report that many MEK members are suffering from mental illness because of the pressures they have been under for the past three decades.

During a visit to Camp Ashraf which was the former base of the MEK, Iraq’s National Security Advisor, Faleh al-Fayad, said that all members of this organisation will be deported and found alternative locations over the next few weeks in coordination with the UN mission in Baghdad.

He emphasised that irrelevant to what the Americans have announced by removing them from their terrorism list, the Government of Iraq continues to regard the MEK as a terrorist and criminal organisation.

Al-Rubaie: Put the MKO on Trial