Maliki & Kobler discussed the problem of MKO existance in Iraq 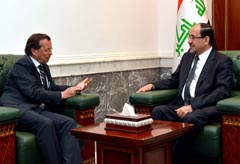 A statement by the Premier’s office received by IraqiNews.com on Sunday reported that “Maliki discussed during welcoming Kobler, the different internal issues along with discussing the files following by the UN Representative in Iraq, most notably the efforts to exempt Iraq from the UN Charter’s 7th Chapter.”