While the Iranian nation was practicing democracy at the polling stations on Friday to elect their new president, the Mujahedin Khalq Organization that has always boycotted the elections in the Islamic Republic seemed to 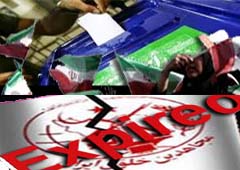 go nuts with the 36 million voters who have no sympathy for the MKO but welcomed the Presidential Elections in Iran.

The MKO propaganda makes efforts to boycott each and every election in Iran labeling it as "sham elections", "rigged elections" and claiming "low voter turnout" despite the fact that the large majority of Iranians hardly ever know the MKO and those who remember them as an Iranian guerilla group hardly ever trust them.

Susan Cornwell of Reuters writes of the group’s well-paid lobbying campaign in the US despite lack of support among its own nation. In her piece "Far from Iran elections former guerrillas lobby Washington", Cornwell analyzes the controversial situation of the MKO among in the United States. " But as Iran elects a new president on Friday, the MEK has no discernible role in politics at home, where it is mistrusted – even by government critics – for having been allied with Iraq’s Saddam Hussein during the 1980s Iran-Iraq war", suggests the Reuters correspondent.[1]

As the Reuters asserts that the MKO tries to compensate its lack of reliability in Iran by running wealthy lobbies in the land of the enemy of the Iranian Government –actually the land of former enemy of the MKO, US Imperialism. Unable to operate openly in Iran, the MEK is instead waging some of its battles in Washington. It opened an attractive new office in April just a five-minute walk from the White House, according to the Reuters. [2]

Despite interviewing a number of prominent supporters of the group in the Unites States the author of the Reuters piece believes that the MKO is a "Tough Sell" in America because of its dark record against the U.S. which for many years has blamed it for the killing of six Americans in Iran in the 1970. [3]

Following the election of Iran’s reformist-backed presidential candidate Hassan Rowhani, it is believed that the US and other Western States see an opening in the process of nuclear negotiations. The New York Times’ piece dated June 13 suggests Rowhani as "the West’s best hope" –although the author tries to convince the audience that the election in Iran is "deeply flawed". However, he views the election in Iran as" important" because "it gives Iran and the United States a fresh diplomatic opportunity to avoid a dangerous confrontation over Iran’s nuclear program". Nuclear talks have always been a nightmare for the MKO. The group has been working for years to use the Iranian nuclear program as a justification to grow animosity against Iran in the world. "Once the election is over, it also needs to step up diplomatic efforts, testing through intermediaries if there is any willingness by the new president", asserts the NY Times. [4]

The above-mentioned hypothesis is what the MKO leaders fear the most because according to several arguments the MKO is seeking a Syrian style or Iraqi style –better to say Chalabi Style — regime change in Iran although it always claims "peaceful" regime change. As an organization with so little support in Iran "peaceful" change is never likely." They’ll deny it, but I think it’s pretty simple: their goal is to keep pushing the politics in America to lead to an invasion, some kind of major unsettlement of Iran, that they can sweep into as a new government," Jeremiah Goulka, author of the RAND study told the Reuters.[5]

The previous time a moderate figure, Mohammad Khatami was elected as an Iranian President, the MKO was left with grave consequences. It is widely believed that the designation of the group as a Foreign Terrorist Organization in 1997 was "a move that has been described as a nod to Iran’s then-new reformist president ". [6] The whole story contends that the MKO is not more than a bargaining chip in the hands of Western politicians.

Shortly after the declaration of winner of Iran’s Presidential Election, the U.S. Secretary of State as well as many other governments’ officials welcomed the preference of the Iranian people expressing their readiness for engagement with the Islamic Republic. The press statement of the US Secretary of State, John Kerry read, "We, along with our international partners, remain ready to engage directly with the Iranian government. We hope they will honor their international obligations to the rest of the world in order to reach a diplomatic solution that will fully address the international community’s concerns about Iran’s nuclear program."[7]

The MKO propaganda is awfully obsessed with the elections in Iran. With the actual result of the elections their fear is said to get more serious. Regardless of what the future of Iran- US relations will be like, it seems that the MKO has to spend more and more money, time and energy to reimburse the loss they incur by the side of the Iranian people.

[4]The New York Times The Editorial Board, Who will succeed the President Ahmadinejad?, June 13, 2013