Any individual, group or organization that is not approved by MKO leader, would be considered as the “agent, spy or mercenary “of Islamic Republic, according to MKO’s dialectic; anyone who criticizes MKO’s ideology and activities, is demonized as the most atrocious enemy, by the organization’s propaganda system.

MKO uses the terms like democracy and human rights as tools to crush those who believe in other ideologies than that of MKO. However, the news of families’ visit to Ashraf where their children are captivated by MKOand MKO leaders do not allow them to meet their beloved ones, exactly represents the contradictory behavior of Rajavi’s cult toward human rights. The families who are now awaiting at Camp Ashraf gate, on hunger strike, have not seen their children for more than twenty years. The reason for this anticipation is the same old excuse:”families are gathered by IRI’s agents and sent to Iraq.”

Given that the families are sent by IRI, it is not even fair to deprive some elderly parents who have 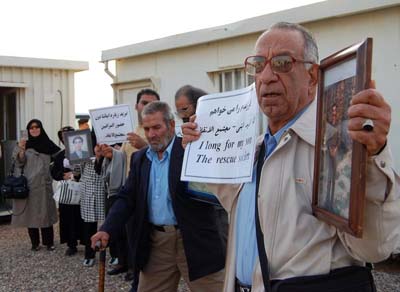 not been able to contact their children by phone for long years, from visiting them. What kind of human rights do MKO leaders believe in?

At the time of Iraqi dictator, Saddam Hussein who was MKO’s land lord, Massoud Rajavi ordered to stop all family relationships under the title of “Ideological Revolution”. The parents were separated from their kids; the couples were forced to divorce …

After the fall of Saddam Hussein, the way was paved for families in Iran to come to Ashraf. They could pass various obstacles in the occupied, critical Iraqi territory in order to be able to visit their children for a few hours. The visits were definitely a heavy coup for the organization because the process of defection was accelerated since then. Thus Maryam Rajavi issued her order from her base in Auver Sur d’Oise, Paris to stop the families visiting Ashraf residents.

She didn’t hesitate to say:

– Do not accept to visit your family, if they come to Ashraf.
– If you were forced to visit them, you should face them in a way that they would understand you were not happy with visiting them. If needed, you should slap them.
– Never accept a family visiting for a second time …

Having seen the outcome of family visits at Ashraf, Maryam Rajavi is terrified of further visits, she is well aware that family visits revive the feelings and emotions among captured residents of Camp Ashraf. The visits create new questions in residents’ minds on why they are in the organization.

The family visits will spark a light in the hearts of Ashraf captives and make them distanced from the cult of Rajavi and this is what the cult leaders panic.

Families of the MEK hostages denied of their rightsFamily in the Mujahedin-e KhalqHot TopicsRajavis and Cult LeadershipThe MEK; the Hypocrites
FacebookTwitterPinterestEmail
previous post