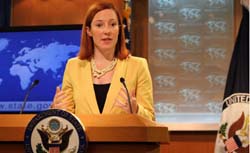 On June 19 and June 21, two groups of Camp Hurriya residents, 27 in total, were permanently relocated to Albania. This was the third of a series of movements planned under the terms of a generous humanitarian offer by the Government of Albania to accept 210 individuals from Camp Hurriya. The United States thanks Albania for its compassion in this humanitarian endeavor. So far, 71 individuals have relocated to Albania as part of this agreement, and we look forward to additional individuals relocating as soon as possible.

The United States strongly supports the work of the Office of the United Nations High Commissioner for Refugees (UNHCR), the United Nations Assistance Mission in Iraq (UNAMI), and the tireless efforts of the UN Special Representative of the Secretary General Martin Kobler to relocate remaining camp residents outside Iraq. We urge the Mujahedin-e Khalq leadership, and all responsible parties, to ensure full cooperation with the UNHCR relocation process so that future movements occur as expeditiously as possible.

The relocation of Camp Hurriya residents outside of Iraq is a humanitarian mission and vital to their safety and security. The United States renews its call on the Government of Iraq to help ensure the security of the camp in accordance with its December 25, 2011 Memorandum of Understanding with the United Nations. This is a matter of extreme urgency given ongoing threats to the camp. We further renew our call on the Government of Iraq to investigate and bring to justice the terrorists responsible for the June 15 rocket attack against the camp.