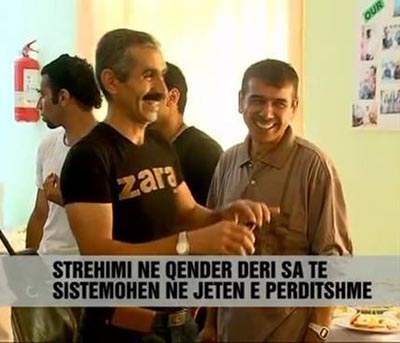 A new life, away from war and terror, for the Mujahideens in Tirana. They no longer want to hear about their old organization or the time when they were Saddam’s mercenaries or fighters against the Shah.

This new situation has been confirmed by the Iranian news agencies, which were not very happy about the Mujahideens’ accommodation in Tirana. Scores of members of the Mujahideen Khalq Organization, MKO, (also known as MEK, NCRI and PMOI) have deserted upon their arrival in the Albanian capital, Tirana, declared a high MKO official on Saturday [19 October].

“At least 70 MKO members have deserted the group since their arrival in the Albanian capital,” the leader of a MKO cell, who has also deserted, declared to the FNA [Fars New Agency] on Saturday. “The deserters’ group includes the names of some leading MKO officials,” added the source, speaking on the condition of anonymity as he fears for his life.

A report published in June also said that the MKO members sent from Iraq to Albania over the past few months were from among those who did not obey the orders of their network leaders. According to the Dedehban Centre, most of the MKO members transferred from their transitional camp in Iraq to Albania were no longer obedient to their masters and could no longer be controlled by the leaders of their network.

Referring to a recent ceremony in France to mark the anniversary of the group’s armed attack against Iran in 1981, a ceremony that was also broadcast via video-conference to a luxury hotel in Tirana for the MKO members in Albania, the report said that only 10 out of 71 MKO members in Albania were present. The others showed no interest.

There has even been an attempt [by the members] to voice their opposition to Rajavi, the cell leader. Many of the MKO members have abandoned the organization, whereas those still remaining in the camp have said that they are ready to leave it, but cannot due to pressure and death threats. [passage omitted with details about the group’s history]