Secretary-General Ban Ki-moon today announced the appointment of Jane Holl Lute as his Special Adviser for Relocation of Camp Hurriya Residents Outside of Iraq. 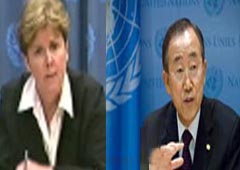 Camp Hurriya, located near the Baghdad airport, is home to some 3,200 Iranian exiles, many of them members of a group known as the People’s Mojahedeen of Iran who have been in Iraq since the 1980s.

Since 2011, the UN Refugee Agency (UNHCR) together with the UN Assistance Mission for Iraq (UNAMI), has been trying to find relocation opportunities outside Iraq for all camp residents. So far, the international community has secured relocation to third countries for only 311 residents.

In her new role, Ms. Holl Lute, a citizen of the United States, will work with a wide range of stakeholders, in particular Member States, to assist in relocating the camp residents, according to a statement from Mr. Ban’s spokesperson.

Ms. Holl Lute most recently held the post of US Deputy Secretary of Homeland Security. She was also the Executive Vice-President and Chief Operating Officer of the UN Foundation and the Better World Fund, among other positions.

The newly appointed UN official will work with Mr. Ban’s Special Representative in Iraq and UNAMI head, Nickolay Mladenov, who last week reiterated that the Iraqi Government bears the responsibility for protecting the camp’s residents, as part of an agreement it signed with the UN in 2011.

Camp Hurriya, as well as Camp New Iraq (formerly Ashraf) which had previously housed the group, have been targeted for violent attacks.