Press TV has conducted an interview with Dr. Webster Griffin Tarpley, an author and historian from Washington, to discuss why the French Foreign Ministry has recently condemned the anti-Iran terrorist Mujahedin-e Khalq Organization (MKO) for its acts of violence.

The following is an approximate transcript of the interview.

Press TV: The terrorist group has been active in France for years, and the French government has been 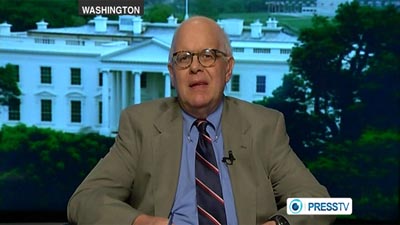 aware of their tactics and activities all these years. But this statement by the Elyse just recently is somehow unprecedented. Why now?

Tarpley: There is a certain history of this. Back in 1986, the year when there were lots of bombs in the Paris subway, Jacques Chirac essentially kicked [out] the Mujahedin-e Khalq known in the US primarily as MEK. The MEK were kicked out but they attempted to make various comebacks and in 2003 there was a round-up of MEK that was piloted b Sarkozy, the Interior Minister who was on his way to becoming the premier.

I am afraid that the attempt of the French to get rid of these people was aborted about 2009 when the European Union said no, now you have got to be nice to them and probably the worst thing is Hillary Clinton in September 2012 took the MEK, Mujahedin-e Khalq off the terror list which was of course a mockery.

And if you look at that bombing for example the Jewish museums in Brussels, that is tied to the ISIS in a number of ways. That might have frightened the French authorities so much that they have decided to start staking the ground for some measures against the MEK.

Press TV: How much is that a threat the West in general and of course some countries in particular, like France and the United States might experience what is happening in the Middle East on their own soil?

Tarpley: It’s of course extremely dangerous and the thing that the French point to, I think it shows the insidious methods that MEK has. It’s a very sinister group but here is what they are expert in. They buy officials, they essentially bribed them. I guess most people would say the formula they took here in the US was they would hold conferences and they would offer speaking fees to a lot of very important intelligence community type officials and these speaking fees were astronomical. Of course, the money was coming from the US taxpayer. It was a way to recycle US taxpayer money into the pockets of some of these corrupt officials.

In 2012, Seymour Hersh, well-known investigative journalist, concluded that the MEK was in effect a branch of the joint special operations command of the United States. In other words, “state-sponsored terrorism” I guess would be the word that would occur to many people. But the people that they had got in to speak in favor of them had included former Attorney General Mukasey, former Secretary of Homeland Security Ridge, former CIA Directors Woolsey and Goss, they had former Mayor Giuliani of New York, Howard Dean from the left-wing of the Democratic Party, the former head of the FBI Louis Freeh and John Bolton, the well-known Islamophobic neocon.

So, all of those endorsements together and the help of the Hillary Clinton got them off the list terror list in September 2012 and we can assume that the US government support to them is growing and growing and growing. But of course in this chaotic situation in the Middle East, the strange big fellows are finding themselves in unexpected conflict situations and I think since President Hollande of France is so unpopular, he doesn’t want to add some kind of terror wave to this or he may be getting ready to crack down, one would hope so on MEK.

Press TV: All in all, and concerning the current circumstances will there be any effort to, for France, to kick the MEK out of France?

ley: I guess that depends on the French. That’s a little bit hard to judge from here but there is generally speaking in the Western intelligence community a kind of frisson – a shudder of alarm – about the terrorists that are being minted in the ISIS but also in the Nusra Front inside Syria and in this entire situation.

And whatever happens in Iraq and Syria in the coming months, a lot of them are going to be coming back to Western Europe and the United States. So, we see the policy of meddling and promoting terrorism necessarily courts this idea of blowback that the people that you have unleashed against certain geostrategic enemies are eventually going to come back and play a very damaging role vis-à-vis your own societies.

So, it’s a very short-sighted policy and we could say this on the hundredth anniversary of the assassination that started World War I. How much more of this is that the world is going to put up with?