The de-listing fight may be over, but that hasn’t stopped the Mujahedin-e Khalq‘s American cheerleaders from uncritically repeating its propaganda. Here is Hugh Shelton, a former Chairman of the Joint Chiefs:

The main Iranian opposition, the National Council of Resistance of Iran (NCRI), is a viable alternative to the Islamist regime, and we owe it a chance to build a secular, democratic, non-nuclear Iran. If anyone doubted the NCRI’s support base, a groundswell of more than 100,000 Iranians turned up in Paris last month for its annual rally, joined by top politicians, dignitaries and former national security figures, myself included. It was an enormous display of support.

Shelton is opposed to diplomacy with the Iranian government, because he insists that Tehran can’t be trusted to honor its agreements and shouldn’t be “rewarded” for previous deceptive behavior. Leaving aside how crazy it is to spurn diplomacy because governments sometimes lie and break their promises, there is something especially weird about an argument that simultaneously promotes the cause of the MEK while complaining about Iranian deceit. (The NCRI is the umbrella organization that the MEK dominates.) As it has sought to rehabilitate itself in the West, the MEK has claimed all sorts of spurious, self-serving things about what it represents. Despite being a bizarre authoritarian cult with Marxist and quasi-Islamist views, it now pretends to be exactly what Westerners want an Iranian exile group to be. It doesn’t matter to the MEK’s American fans that it is lying about its political views, and they are obviously not worried about reciting those lies for Western audiences. Indeed, it has so completely hoodwinked them that they think it should be rewarded with American support.

It’s important to remember that the MEK and its umbrella group are not “the main Iranian opposition” or anything like it. For one thing, the real “main” Iranian opposition is still in Iran, and unlike the MEK it is not widely loathed by Iranians. Naturally, any exile group would like foreign governments to believe that it is the “main opposition” to the regime in its home country, but in order for this deception to work the foreigners have to be thoroughly oblivious and/or indifferent to the internal political realities of the country in question. If there is ever to be a “viable alternative” to the current Iranian regime, it will come from inside Iran and won’t have anything to do with a group that is best-known for its service to one of Iran’s worst enemies during the Iran-Iraq war. The shilling for this group by many prominent American former officials and politicians is one of the more disgraceful displays of the last decade, and as long as it continues it should be held up for derision. Tanter, A Mediator Between MKO and Israel 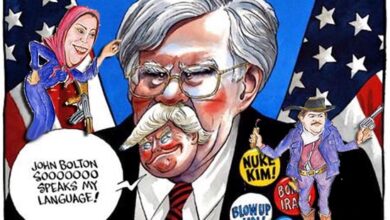 MEK play the role of wedge-driver in the Persian Gulf!