On Tuesday september8, 2015 Mr. Ghorbanali Hosseinnejad and Mr. Mostafa Mohammadi along with his wife; Mahboubeh and his daughter Huriyeh met the Mayor of Auver Sur d’Oise and her deputy. 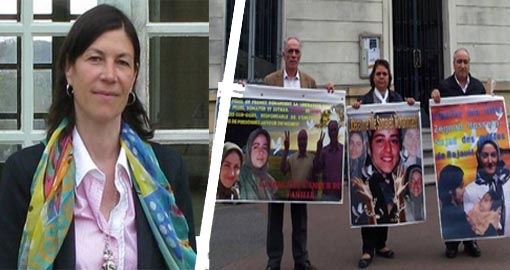 Daughters of both families are hostages of the Mujahedin-e Khalq Cult. Mohammadi family were once the active supporters of the group. Mr. Husseinnejad also was a veteran member of the group.

Expressing solidarity with the families of MKO hostages, the Mayor of Auver said:” …We don’t want them [Maryam Rajavi’s Cult] to stay in our city… they try to pay some of the cities’ personalities and officials to be at the Cult’s service. … However we would ask them to come and reply your appeals and questions on the fate of your children. .. Here is a democratic state and the democracy principles require the issue to be resolved through negotiation… “

The families reiterated:” Maryam Rajavi should personally come and answer our questions, because Maryam, herself is responsible for the kidnapping of our daughters as minors and for endangering them by transferring our daughters from France and Canada to military camps of the cult in Iraq.  In the Cult camps they have been denied any family contacts as well as marital life.

The officials of the municipal then received the families in the Town hall and contacted the MKO Cult requiring them to come and reply the families’ demands.

However the Cult response was insulting and cursing at the suffering families.

The Cult officials didn’t attend the municipal and just their henchmen and thugs were stationed outside the Town Hall to report everything to their commanders.

The authorities then removed the MKO Cult members in order the families to hold a protest in front of the Town Hall. The families of MKO hostages handed out leaflets and CDs and tried to publicize their plight and to expose the Cult atrocities against them and their loved ones. The Rajavi Cult attempts in thwarting the families’ efforts in exposing their crimes was futile.

The municipal and gendarmerie authorities declared their support for the families’ public activities in calling for their demands and escorted them with seven cars outside the city in order to prevent the Cult thugs from chasing or harming the families.