Iraqi militia have threatened more attacks following a rocket barrage that killed at least 26 people at an opposition camp near Baghdad. UN chief Ban Ki-moon has condemned the attack.

Camp Hurriya (Liberty), a former US military base, has housed members of the People’s Mujahedeen Organisation of Iran (PMOI) since 2012, a group that had fought alongside Saddam Hussein’s forces in the Iran-Iraq war in the 1980s. 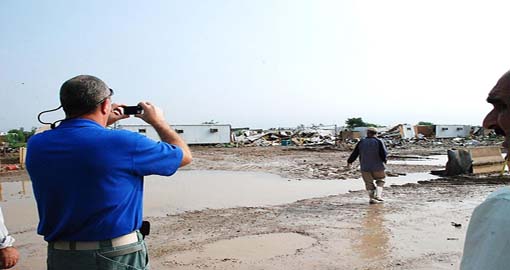 On Thursday at least 15 rockets crashed in and around the camp near Baghdad’s international airport killing more than two dozen people.

Iraqi joint operations command spokesman Yahya Rasool said investigation is underway and that two Iraqi soldiers were wounded in the attack. An abandoned truck mounted with rocket tubes had been recovered in Bakriya, north of the camp, he said.

"The people behind this attack are terrorist criminals who want to destabilize the country," Yasol told Reuters news agency, without specifying any group or nation.

A Shiite Muslim militia in Iraq has claimed responsibility for the attack – the deadliest in years – that targets the Iranian opposition.

"We warned the members of this terrorist organization to leave Iraq as soon as possible … If they don’t do so, there will be more similar attacks," al-Mukhtar Army commander Wathiq al-Battat was quoted as saying by Iran’s Fars news agency.

The PMOI stands accused by rights groups of taking part in the brutal suppression of a 1991 Shiite uprising against Saddam Hussein, making it widely reviled by members of Iraq’s own Shiite Arab majority, which came to power after the US-led Iraq invasion in 2003.

EU, UN, US line up to condemn attack

UN chief Ban Ki-moon "condemns the attack… on Camp Hurriya, near the Baghdad International Airport, which left at least 26 residents dead and many more wounded," the general secretary’s office said Friday in a statement.

"This is a most deplorable act, and I am greatly concerned at the harm that has been inflicted on those living at Camp Liberty.” the UN’s High Commissioner for Refugees Antonio Guterres said. "Every effort must continue to be made for the injured and to identify and bring to account those responsible."

US Secretary of State John Kerry said efforts to relocate the members – in the works for years – should be accelerated.

"No matter the circumstances, on this point we remain absolute: the United States remains committed to assisting the UN High Commissioner for Refugees in the relocation of all Camp Hurriya residents to a permanent and safe location outside of Iraq," Kerry said in a statement.

“It is crucial that the Iraqi government fully investigate the incident and immediately step up security at the camp in line with its duty of protection of the camp residents under the December 2011 agreement with the United Nations,” the EU’s external affairs office said in a statement.

PMOI had been delisted as a ‘terror organization’

Until a few years ago, PMOI — also known by its Farsi name Mujahideen-e-Khalq Organization (MKO) — was listed as a terrorist organization by both the US and the European Union.

Shahin Gobadi, a PMOI spokesman, accused "agents of the clerical (Iranian) regime inside the government of Iraq" of launching the attack and also placed responsibility on the Iraqi government and the United Nations.

The group, which critics have described as a cult, enjoys a well-connected network of former and current officials who advocate on its behalf.

Following an intensive lobbying campaign, it succeeded in being removed from the US and EU terror lists.

But around 3,000 remaining dissidents at Camp Hurriya are still waiting to be relocated to other countries.