Families’ of Mujahedin-e Khalq hostages as well as recently defected members of MKO participated the meeting.

Mr. Fereydoun Ebrahimi and Bayramali Mohammadi were the two defectors who participated the meeting.

The families congratulated the defectors for their brave decision in liberating themselves from the bars of Rajavis cult. 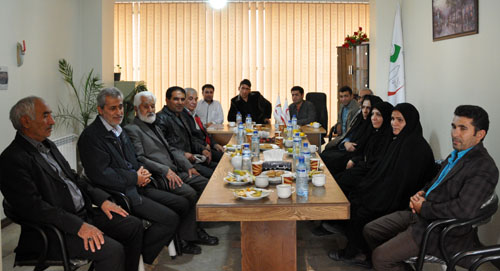 Mr. Ebrahimi introduced himself declaring why and how he joined the group:”

In 2000, I immigrated to Turkey for sewing; the work I was proficient at. After a month I met a man who said he could send me to Europe via Iraqi border providing me with a good job and residency. I was fascinated by his false propaganda. In a week he provided my documents. Then I was transferred to Iraq and Camp Ashraf. At the Camp the commandants of the group convinced me that I had to wait for two years to be transferred to Europe.

However, they kept me at the group camps for 14 years without any contact with the outside world. I tolerated many physical and mental pressures within the Cult. At last in March 2015 I managed to release myself. At Camp Liberty I introduced myself to the Iraqi forces and UN members in Camp Liberty. I contact my family as soon as I stepped out of the Cult camp. Then I moved to Turkey and there I could visit my family members after so long years. After Turkey I immigrated to Germany. Although I was decided to stay there, when I heard about my mother’s illness, In October 2015 I repatriated. Now I am married and work at my brother’s shop. “