Alireza was a one-year old toddler when he saw his father for the last time.

Alireza Beheshti’s father; Mr. Morteza Beheshti and his uncle Mostafa was deceived by the Mujahedin-e Khalq recruiters in Turkey into joining the Cult in 2001.

Alireza is now 16. His father victimized by the MKO Cult leaders at camp Ashraf in 2011. His uncle;Morteza is still hold hostage by the MKO.

Beheshti family have several times gone in front of Camp Ashraf and Camp Liberty to visit their beloved Morteza or even get a news of him.

They do their utmost efforts in accompany with other suffering families of MKO destructive Cult to liberate their loved ones. 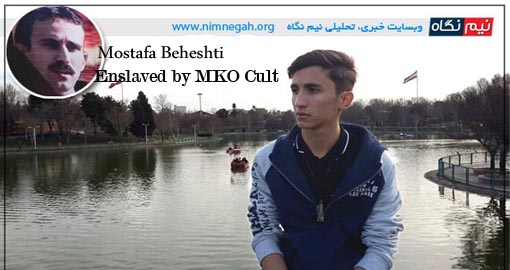 With greeting, I am Alireza Beheshti and it is 16 years that I spend days and nights with this hope that I can see my father whose name is Morteza Beheshti. I, ve kept all my handwritings from my childhood to show them to my father.

My father and my uncle Morteza and Mostafa Beheshti were fallen in the traps of Rajavi band in Turkey. They were hunted by them. I am a child who has not seen his father from a time I was just one year old. Now, I am 16 years old. My dear father was killed in 2011 in Ashraf jail. I burn in the pain of separation for years. Rajavi band killed my father and I became an orphan. Now, I search my uncle whose meeting makes me glad as if I see my father. I am a child and I speak with my own language. I call those who speak from human rights. I could not see my father, at least provide a condition for me to see my uncle. I could not take part at my father’s funeral. I wait to see my dear uncle even for many years like my aunts Nargess, Laila and my uncle Mohammad who are waiting for many years. You Rajavi! You deprived me from meeting my father, but I will get my uncle from you. My dear uncle! Please, say to me what did my father do in the pain of my separation. Come to give my handwritings. I want to give them you as a gift.