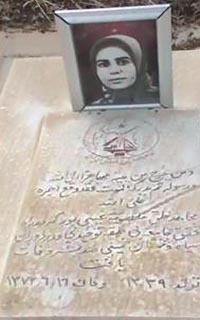 Mujahedin Khalq Organization ( the MKO/ the Cult of Rajavi). Prominent former member of the Mujahedin Khalq, Batul Soltani recalls the times that they both suffered grieves of separation from their children. ”We both missed our children”, she writes. However, they could not criticize the cult-like system ruling the group.

Masoumeh was not used to observe religious rules well so she was under severe peer pressure in the cult, according to revelations made by Batul Soltani listiong a number of dissident members of the MKO who were physically diminished by the leaders.

“She was all the time suppressed by the group authorities for her careless covering or for not performing prayers,” Batul Soltani writes.

Meanwhile, another former member of the MKO, Edward Termado writes about Masoumeh Gheibipour,”She used to take her headscarf back to show off her hair as a way to protest suppressions made by her superiors.”

Edward Termado describes the grieves of Masoumeh, “Before she was separated from her son, she looked happy and delighted to see her son in the camp but her son -Makan- was sent out of Iraq. Since then she always looked depressed and sad.”

Batul Soltani who was a friend of Masoumeh stated how Masoumeh left her life behind by openly criticizing the leaders’ approaches in public meetings. “She was so courageous that she could stand up in the meetings and say “Ideological leadership is a suppressive argument.” Her courageous objections was then resulted in grave pressure by the side of the group authorities or her peers. She was labeled as “traitor”. Batul recalls that one of the agitated brainwashed women in the meeting saying “if you cheat on Masoud, I will strangle you!”

Eventually, Masoumeh was found dead in her bed a few days later. She was strangled to death by her headscarf.

When Batul got to know that Masoumeh was killed, she rushed into the location. No one was there except twelve members of the newly elected members of the Elite Council!

Batul was so shocked that she got sick after the horrible incident. Then she was made to attend a meeting in which Maryam Rajavi tried to convince them that Masoumeh was loyal to Massoud Rajavi until the last moment. “Nothing was said about how Masoumeh was killed,” Batul Soltani writes.

Surprisingly, a few days after her assassination, the group announced that Masoumeh passed away in hospital! They graved on her tomb that she died from an illness!