“The Rajavi’s mercenaries scattered letters full of fabrications, insults and curses against me at the building where I reside. “Ghorbanali Hosseinenjad wrote on his FB page on May12th, 2015.

Publishing a photo of the fake statements, former member of Mujahedin-e Khalq group wrote:”the MKO elements distributed such fabrications against some other defectors and me, during our last week’s action on May7. We took action in support of Abrishamchi’s trial in a France court.

Mr. Hosseinenajd the veteran translator of the Mujahedin-e Khalq foreign affairs defected the group in 2012 due to the inhumane, cult-like affairs of the group. He was harshly verbally harassed by Massoud Rajavi after his defection from the MKO. Though managing to liberate himself from the MKO Cult Camp, he forced to leave his dear daughter, Zaynab behind.

According to his testimonies, when he was in the camp he was not allowed to visit his daughter regularly. “The leaders of the MKO cult did not allow me and my first daughter Zeinab, 34, to visit and talk to each other while we were both in the same camp,” said Hosseinnezhad. “We were just allowed to meet each other on the New Year’s celebration for an hour or two and under their direct control and supervision.” 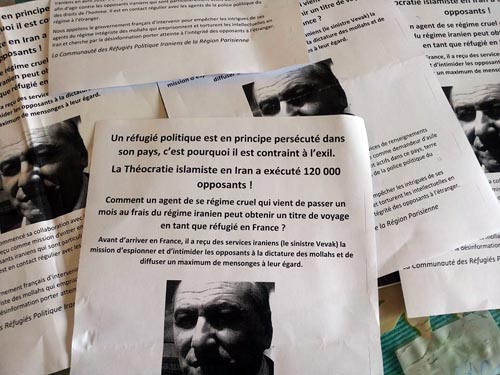 Batoul Soltani and Reza Sadeghi, attended a meeting in the EUP