Following the terrorist attack in Nice, France, the former speaker of the US House of Representatives called for screening and deportation of Muslims who practice Sharia (Islamic law). He told that "Sharia is incompatible with 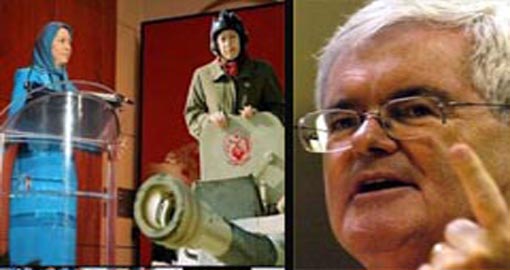 Western civilization” while a few days ago he spoke in the rally of the Mujahedin khalq Organization (the MKO/ the Cult of Rajavi) and declared his sponsorship for this Islamist terrorist cult-like group.

The former presidential candidate of the United States asked for monitoring the mosques. “Where do you think the primary source of recruitment is? Where do you think the primary place of indoctrination is? You’ve got to look at the madrasas (religious schools), if you’re a school which is teaching Sharia, you want to expel it from the country," Gingrich continued. He forgot or denied to notice that the MKO’s camp in Auver sur d’Oise, Paris and also its bases in Tirana and Baghdad are primary places of indoctrinating individuals with reactionary ideas.

“The irony! Gingrich demands Moslems be deported from America a couple of days after he attended a rally in France in support of a Moslem Terrorist Cult, the MEK, funded by Wahhabi Saudis! And not a freaking news stations is making the link! Wake up people…”

Mark Dankof, the American correspondent confirmed Soraya by sharing this:

“Wake up, folks. Soraya Sepahpour-Ulrich is absolutely correct. Check out the Rand Corporation report on the MEK. I witnessed their handiwork in Tehran in the 1970s at a funeral for 2 American officers.”