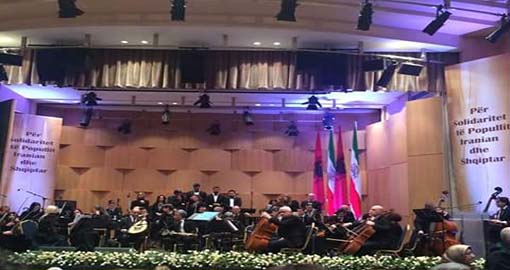 On January 16, 2017, at 19:00 in the concert hall of the Orthodox Church, the Iranian Mojahedin held an event with the participation of several artists and many politicians.

The concert was held purportedly to show solidarity of the Albanian people with the Iranian Mojahedin who came to our country on the basis of a secret agreement between the Albanian government and the US.

Hidden below the ground floor of the hall, and out of sight of the media, Albanian politicians and artists gave full support to the Iranian Mojahedin.

People are dying from cold, they are being killed in the streets, teenagers are dying on the job, these are only some of the cases of violation of human rights in our country that Gjebrea never covers.

Shehi, a Member of Parliament, was apparently only accidentally in the place, because during his address Shehu spoke about the Iranian government as one of the most isolated countries in the world because of its lack freedom and democracy which is demonstrated by its aggression against people. But Shehu apparently did not know that Iran enjoys diplomatic relations with Albania, and that only a few days ago, Foreign Minister Bushati signed several cooperation agreements with the Iranian state [during a visit to Tehran].

On the other hand, maestro Jean Ciko also spoke of the support that the Albanian people have for Iranian terrorists, and said he was satisfied with the cooperation they had with them over the years.

But if all those participants talked about democracy, and if all these people seek freedom, why were the media not allowed at that concert; that media which Shehi, Jean Ciko or Elona Gjebrea take with them wherever they go to do any work so that they can be praised? This concert was not held in the presence of any media.