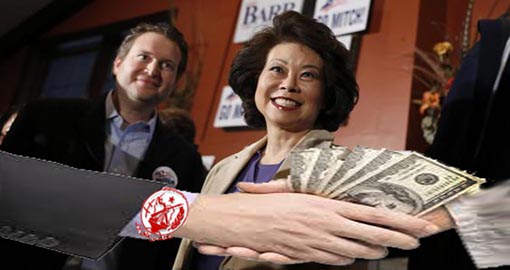 A secretary in the Cabinet of US President Donald Trump and at least one of his advisers have accepted money from the anti-Iran Mujahedin-e Khalq Organization (MKO) to give speeches for the terrorist group.

The MKO terrorist group has in the past lured a roster of former US and European officials to participate in its anti-Iran events.

Elaine Chao, confirmed this week as the Cabinet’s transportation secretary, received $50,000 in 2015 for a five-minute speech to the political wing of the MKO.

Chao, the wife of Senate Majority Leader Mitch McConnell of Kentucky, spoke before an MKO conference in 2015 in the French capital, Paris.

She received the so-called honorarium from the MKO-associated Alliance for Public Awareness, according to a report she filed with the US Office of Government Ethics.

In March 2016, Chao received another $17,500 for a speech that she gave to the Iranian-American Cultural Association of Missouri, with reported links to the MKO terrorist group.

Former mayor of New York City Rudy Giuliani has also acknowledged that he has been paid by the MKO for his appearances at the terrorist group’s events. However, the total amount of the received money is unclear because he has not filed a government disclosure form since his failed Republican presidential attempt in 2008.

Over two dozen former Republican and Democratic US officials, including former House speaker and Trump adviser, Newt Gingrich, have also spoken before the notorious group. Some have even publicly acknowledged being paid.

Gingrich spoke to the MKO at a gala in 2016, although it is not clear whether or how much he was paid.

The support of former US officials, including Giuliani, for the MKO could be seen in a letter sent to Trump on January 9 just before his inauguration.

"We repeat the call for the US government to establish a dialogue with Iran’s exile resistance," read the letter signed by Giuliani and others.

The terrorist group also sided with the former Iraqi dictator, Saddam Hussein, during Iraq’s eight-year imposed war against Iran in the 1980s. The group also helped Saddam in his brutal crackdown on his opponents.

There are serious questions about the possible influence of the terrorist group in the new US administration.

"The Mujahedin have backed the winning horse. They are going to have some at least entree into the administration," said Ervand Abrahamian, a professor at the City University of New York, who wrote a book on the MKO.

“I think it weakens the US because the more they have access to the administration, the more people in Iran are going to be scared of anything the US does,” he added.

The chairman of the foreign affairs committee of the MKO’s political arm, Mohammad Mohaddessin, has said the terrorist group welcomes the Trump government, as "some people within this administration" plan to change the US policies toward Iran.

It is yet to be seen how close Trump’s administration ties will be with the MKO.

This as the US State Department added the MKO to its list of foreign terrorist organizations in 1997 for the group’s involvement in the killing of Americans in Iran in the 1970s and an attack on US soil in 1992.