During his presidential election campaign, Donald Trump proclaimed long and loudly that he sees Iran as Washington’s regional enemy. 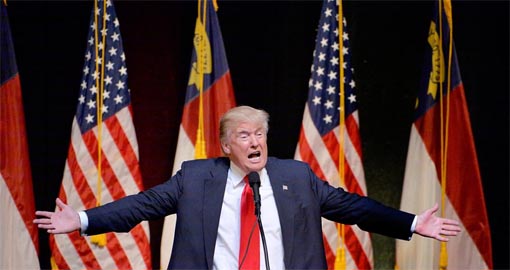 He pledged to “tear up” the agreement providing for the dismantling of Iran’s nuclear programme in exchange for the lifting of sanctions, reached in 2015 by Iran and six world powers.

Aware that the other five signatories of the deal would not accept a unilateral US abrogation, he has since retreated by saying he would actively “police” the deal, to force Iran to abide by its commitments.

Ironically, it is the US, rather than Iran, that failed to honour its obligations by obstructing sanctions relief, particularly in the banking sector.

Last weekend, US House of Representatives Speaker Paul Ryan, a Republican, admitted that the US is in no position to roll back the nuclear agreement.

He said it is not possible to “reconstitute the multilateral sanctions that were put in place” to compel Iran to confine its nuclear programme to providing fuel for power plants and medical isotopes.

Iran ended research on bomb making without making any device in 2003, and there is no evidence that it has resumed this effort.

Trump needlessly and heedlessly included Iran in the group of seven Muslim countries when imposing his hasty, poorly prepared and ill-conceived ban on US entry on citizens from these countries holding visas.

The largest number of people excluded are Iranians, as they are citizens of the largest and most populous country of the seven, the others being Iraq, Syria, Yemen, Libya, Somalia and Sudan.

Although federal judges issued restraining orders, temporarily rescinding Trump’s ban, Iranians are upset and confused by this measure, as it is meant to apply to citizens of countries involved in “terrorist” incidents in the US.

There have, in fact, been no attacks by Iranians on US citizens in the US and only one in Iran itself.

This took place in 1975, when two air force officers were killed en route to an air base. This was before the 1979 overthrow of Washington’s ally, the shah, by the Islamic Revolution.

The family of Lt. Col. Jack Turner, one of the victims, filed a lawsuit, arguing his death was in revenge for the killing by the shah’s intelligence agency, Savak, which was supported by the US and Israel, of nine anti-shah elements fleeing arrest.

The commander and members of this group, the Mujahedin e-Khalq, were executed in 1976.

It does not make sense that the Turner family is suing Savak, which is long gone, or the Mujahedin, an enemy of the current Iranian regime and the friend of some senior members of the Trump administration.

The administration threatened to put Iran “on notice” for test firing a medium-range ballistic missile at a time US, British, French and Australian naval manoeuvres were taking place in the Gulf, just off the Iranian coast.

Both the missile launch and the exercises were provocative, intended to generate a verbal response.

Tehran contended the test did not violate the nuclear deal or US Security Council Resolution 2231, which endorses the nuclear accord and calls on Iran not to launch ballistic missiles “capable of delivering nuclear weapons”.

Prior to the Trump-era test, Iran had carried out 11 tests since the signing of the deal. The US and other sponsors did not respond.

Trump ordered sanctions to be imposed on 25 individuals and entities said to be identified with the missile programme, a slap on the wrist for propaganda purposes.

Trump keeps beating the war drums to maintain the myth that Iran is the major destabilising force in this region and the world’s “biggest state sponsor of terrorism”, although neither allegation is true.

This region is being threatened and destabilised by Sunni takfiris associated with Daesh and Al Qaeda, who are the main instigators of terrorism here and abroad, rather than by Shiite Iran.

The US also contends that the Houthi tribal rebels fighting Saudi-sponsored forces in Yemen are “proxies” of Iran.

This is a blatant lie. Iran has given verbal support to the rebels, but is not financing, arming or advising their forces as it is doing for the Syrian army in its fight against an array of mainly takfiri insurgent groups, including Daesh and Al Qaeda.

Dan De Luce and Paul Mcleary, writing in Foreign Policy, say: “Trump’s aides see Yemen as an important battleground to signal US resolve against Iran and to break with what they consider the previous administration’s failure to confront Tehran’s growing power in the region.”

They argue that this approach could trigger Iranian retaliation against the US in Iraq and Syria or, fancifully, war with Iran.

Tehran is not committed to the Houthis as it is to the survival of the Assad government in Syria and to the Shiite fundamentalist-dominated government in Iraq.

The Republicans have simply refused to come to terms with the fact that George W. Bush installed the current pro-Iranian regime in Baghdad.

By handing over secular Iraq to this regime, the US provoked the Sunni takfiri backlash that the US is now trying to contain.

Russia and Iran have shouldered this responsibility by deploying forces in both Syria and Iraq. Consequently, Washington should consider joining Moscow and Tehran in this endeavour, instead of suggesting cooperation with Russia and whipping up tensions with Iran.

To stiffen Trump’s resolve to deal harshly with Iran, the Republican-majority Congress has begin drawing up legislation empowering him to wage “pre-emptive war” on Iran, at any time he chooses, without seeking authorisation from the legislature.

The stated aim of such a war would be to prevent Iran from manufacturing nuclear weapon, although, under the nuclear deal, Tehran has dismantled most of its nuclear programme and would need many months to build nuclear devices.

Therefore, the declared objective of such a bill would be to mount a war based on lies, like the disastrous 2003 war waged against Iraq by the previous Republican president.

Make no mistake. A war on Iran would not be limited to strikes against the country’s well-protected nuclear facilities. The US would have to destroy Iranian Revolutionary Guard bases and naval installations to prevent retaliation against US forces in Iraq and Afghanistan, as well as against Israel and Gulf Cooperation Council countries.

The flow of oil from the Gulf to Europe and Asia would stop. Iran’s Lebanese partner Hizbollah could strike Israel. Russia could supply Iran with high-tech weaponry and munitions, turning a US war on Iran into a regional and international conflagration, and plunging the fragile world economy into a fresh recession or even a major depression.