Several days ago, the US news agency BIRN, linked with George Soros’ Open Society Foundation, published an article titled ‘Iran Launches Albanian Media to Target Dissident Exiles’. Among other things, the article claims that “Iranian media are opening an online war against an opposition group – some of whose members live in exile in Albania – by launching new websites in English to influence local opinion”. 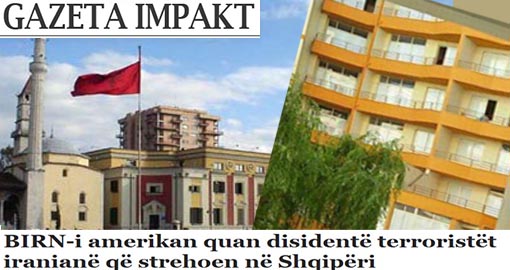 But unlike ISIS and other Wahhabi terrorist organizations, BIRN treats the Iranian Mojahedin as peaceful and harmless people.

In the article Fatjona Mejdini, BIRN journalist, stated that the newspaper Impact “also publishes video from a YouTube channel called Impact that broadcasts interviews with those who call themselves former members of the MEK. The YouTube channel is connected with an Albanian newspaper, also called Impact, which since last summer has written about the dangers that arise from the MEK presence in Albania.”

Impact newspaper, which has published an interview with former Mojahedin member Anne Singleton, is proud that its journalistic investigations are receiving international fame. Impact Newspaper would be happy if the leader of the Radicalized Iranian MEK jihadists and the Albanian Prime Minister would honor us with a debate on refugee activity and the Iranian Mujahedin in Albania.

The article in full is below:

[The MEK clearly believes that any publicity is better than no publicity and insisted on publishing the BIRN article in full on its own website.]

Iranian media are waging an online war against an opposition group – some whose members live in exile in Albania – launching new websites in Albanian to influence local opinion.

Tirana – An Iranian NGO called the Habilian Association has added a new section in Albanian to its news website, Habilian, aiming to target Iranian opposition activists who have found refuge in Albania in recent years.

“The Habilian Association has launched the first specialised website in the Albanian language providing news, analysis and documents on crimes conducted by the Mujahedin-e-Khalq organisation,” the first post in Albanian on the site on January 29 said.

Habilian is one of a few Iranian media outlets that have recently started publishing in Albanian.

While its decision to publish in the language of a small Balkan country night appear unusual, Habilian is open about the fact that it is targeting members of Mojahedin-e-Khalq, the People’s Mujahedeen of Iran, who are living in Albania.

While some believe the Iranian government is backing it and other Iranian media that target the MEK, a diplomatic source from the Iranian embassy in Tirana denied this.

Albania agreed take in MEK members in 2013, when the then Prime Minister, Sali Berisha, offered to shelter some Iranians then under the protection of US forces in Iraq.

The People’s Mujahedin of Iran is a controversial resistance group. Founded in 1965 as a left-leaning opposition to the Shah’s regime, it turned against the Islamic Republic following the 1979 Revolution.

The US listed it as a terrorist organisation in 1997 but it was removed from the black list in 2012 after it renounced violence.

The Albanian authorities have declined to give the exact number of MEK members and their families who found refuge in the country, but estimates suggest there are about 2,000.

The Habilian Association’s website says that it is “an Iranian human rights NGO established with an aim of elucidating the fact that Iran is one of the biggest victims of terrorism”.

The website says the organisation was founded in 2005 by a group of families of Iranian terror victims killed by organisations like MEK.

“As more than 2,000 members of this dangerous cult were relocated to Albania, Habilian Association’s Albanian website was launched in order to enlighten public opinion in Albania about the true nature of the MEK and make the Albanian people aware of the threats posed to them by this terrorist group,” it reads.

A member of the Habilian Association, Masoud Heidari, told BIRN that the Albanian section of the the website aimed to “warn” Albanians about the People’s Mujahedeen of Iran.

“We decided it was our responsibility to warn the Albanian media, politicians and most importantly of all, the Albanian people, of the capacities of this terrorist group to corrupt politicians, [engage in] money-laundering activities, and ultimately their cultish nature,” he said.

The website’s Albanian page is filled with detailed articles and videos that emphasize the alleged dangers of the MEK group.

It also publishes videos from a YouTube channel called Impakt that broadcasts interviews with those who call themselves former MEK members.

The YouTube channel is connected to an Albanian newspaper, also called Impakt, which since last summer has been writing about the alleged risks that the MEK poses to Albania.

Habilian is not the first Iranian media organisation to start publishing in Albanian.

In July 2016, Iran launched the Pars Today news outlet in Albanian, alongside 24 other languages. Pars Today is part of the state-run media corporation Islamic Republic of Iran Broadcasting, IRIB.

On March 3, Pars Today published an article in Albanian entitled “Support for terrorism and Mujahedeen-e-Khalq damage the credibility and interests of the United States”.

The site has several articles about MEK members, who are described as a terrorist group and a cult.

BIRN asked Pars Today to explain their interest in opening an Albanian language section, but got no reply to the time of publication.

The Iranian opposition organisation, the National Council of Resistance of Iran, also has an Albanian section on its official webpage, alongside six other languages.

Linda Chavez, a former US representative to the UN Human Rights Commission, who visited Albania in late February to see how MEK members in the country are living, told BIRN that the articles published in Albanian were Iranian government propaganda.

Chavez described it as a disinformation campaign intended to make MEK members’ lives more difficult in the country.

“I will hope that it will not resonate with Albanian people because the MEK -which whom I have a long association – oppose the anti-women misogynist regime in Iran that is continuing to oppress their own people,” she said.

“The risk to me is if Iranian propaganda is taken seriously,” she added.

She said the Iranians living in Albania were in the process of obtaining refugee status and had started slowly to integrate into society.

After BIRN contacted the Iranian embassy, a source from the embassy insisted that the Iranian government has nothing to do with the websites.

“We do our job here in accordance with our diplomatic functions/role and good relationship with the government of Albania, and we don’t have any connections with these sites, newspapers or YouTube channel,” the source said.

The MEK in Albania seems to have a strong political support. Albanian politicians and MPs from the ruling majority and opposition participated in the MEK’s “Free Iran” event in Paris on July 2016.

However, on January 14, Albanian Foreign Minister Ditmir Bushati made the first official visit by a top-rank Albanian diplomat to Tehran, meeting his Iranian counterpart and President Hassan Rouhani.

During his visit, Albania and Iran signed a memorandum of understanding agreeing to hold regular political talks.

Iranian oppositionists were not mentioned in an Albanian foreign ministry press release that was issued about the discussions.

But Iran’s ambassador to Tirana, Gholamhossein Mohammadnia, said that the issue of what he called the “terrorist cult” was discussed during Bushati’s visit.

Mohammadnia said Iran has been assured that the MEK members have no permission to engage in political activity while living in Albania, the Albanian Daily News website reported.

“Therefore, these people are not allowed to threaten Iran’s security or interests inside or outside Albania,” Mohammadnia added.