As the Mujahedin Khalq Organization (the MKO/the cult of Rajavi) is holding its so-called annual grand gathering in Paris, its supporters try to be grateful for their luxurious trip to Paris donated to them by the group. 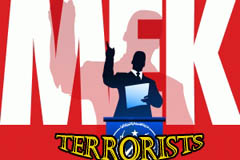 Former Secretary of Homeland Security Department of the United States, Tom Ridge is a well-paid advocate of the MKO. Together with a number of his colleagues, Ridge has been paid thousands of dollars for his speeches in support of the group as well as his first class flights to France and his luxurious hotel rooms in Paris every year.

Therefore, the hefty payments have convinced him to forge the truth. In his recent article, published by Arabnews, just two days before the grand gathering he claims that “many Iranians have boycotted the presidential election” in Iran! He claims that the large voter turnout is the “regime propaganda” while the entire world-wide media have admitted that the Iranians’ participation in the recent presidential elections was great. Aljazeera, for instance described the election as “a massive voter turnout”. “Long queues were seen outside polling stations across the country, and voting time was extended by five hours”, according to BBC.

However, Mr. Ridge prefers to neglect the truth and instead call for support for the MKO declaring his plan to attend the group’s rally in Paris, ”which is expected to draw upward of 1000,000 Iranian expatriates from around the world, and will be broadcast live to millions of Iranians.”

He seems to be so naïve that he cannot recognize the huge number of non-Iranians who are bused to the so-called grand gathering from around Europe including college students, African and middle eastern refugees and a lot more irrelevant people who have been promised a free trip to the lovely memorable French capital, Paris.

He claims that millions of Iranians watch the MKO’s masquerade show live while the 80-milllion Iranian population who almost all have access to the Internet and satellite TV channels, hardly ever know the MKO or even if they know the group they do not sound eager to know about it or to follow its news.

Mr. Ridge’s is made forget the violent background of the MKO. Ironically, he advises the international community to “encourage the democratic transformation of Iran by supporting democratic alternatives to the current regime”. This is an alarming sign of his poor judgment about the MKO and its situation among the Iranian public opinion.

Indeed, various sources emphasize that the MKO enjoys very little support in Iranian public because of its cooperation with Saddam Hussein during the eight years of Iran-Iraq war and moreover due to its violent bloody struggle against the government that took the lives of thousands of Iranian civilians.

“The group is wildly hated inside Iran and has almost no support in the Iranian diaspora”, writes Daniel Larison of the American conservative. “It is widely unrepresentative to what most Iranians in Iran and elsewhere want for their country.”