Trump to meet his match in Netanyahu

On Monday 18 September 2017, The Guardian writes that Secretary of state Rex Tillerson and national security adviser HR McMaster both indicated the US is open to negotiations on staying in the accord. 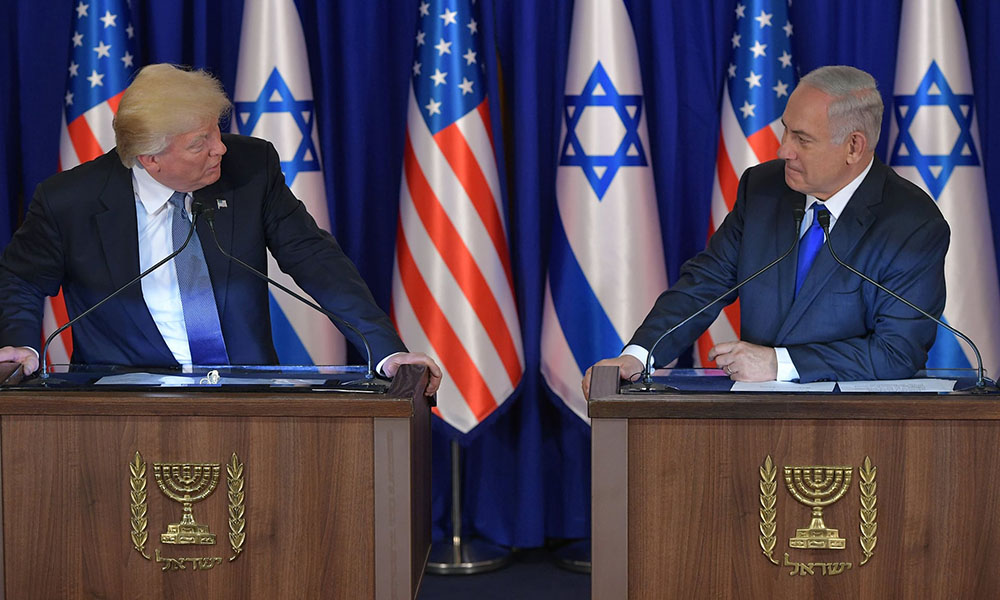 Trump and Netanyahu’s antipathy to the multilateral deal agreed in Vienna two years ago binds them together, even as it sets them apart from the overwhelming majority of other world leaders attending the annual UN summit.

Western allies in Europe – most notably the UK, France and Germany, co-signatories of the 2015 deal – remain committed to the agreement and have signalled they are willing to disagree sharply and openly with Trump on the issue.

Nikki Haley, the US ambassador to the UN who made herself the principal channel for the president’s critique of the deal, has been a lonely voice against it on the security council.

The stance taken by Netanyahu and Trump has also set them apart from their most senior national security advisers.

On a visit to Buenos Aires on Tuesday, the Israeli prime minister declared: “Our position is straightforward. This is a bad deal. Either fix it – or cancel it.” Netanyahu is supported in that position by his defence minister, Avigdor Lieberman, and the US ambassador in Washington, Ron Dermer. But he is reportedly not backed by the Israeli defence and intelligence establishment, which believes Iran is abiding by the agreement and its strict limits on nuclear activities and stockpiles of fissile material.

Getting Trump to do his bidding on Iran helps Netanyahu to present a domestic political image of being a winner.

“In line with Netanyahu’s perception of what serves Israel, his interest is in maintaining a strong American presence in the region including militarily and in a maximally adversarial US-Iran relationship,” said Levy, head of the US Middle East Project. “Getting Trump to do his bidding on Iran also helps Netanyahu to present a domestic political image of being a winner.”

Trump has signalled his intention to withdraw certification of the Iran deal in a report the state department is due to submit to Congress by 15 October. Although that would not lead directly to the end of the agreement, it would open the door to new US sanctions which would represent a violation of the deal and trigger its unravelling.

Such a move is known to be opposed by both the secretaries of defense and state, James Mattis and Rex Tillerson. Both are generally hawkish on Iran but argue that the US should not provoke a new crisis – and possibly a nuclear arms race – in the Middle East in the midst of a tense nuclear and missile stand-off with North Korea.

The regional and global threat represented by Pyongyang’s rapidly accelerating nuclear weapons programme will be another theme of Trump’s first address to the UN. His administration has repeatedly threatened that it is ready to resort to military action if UN sanctions do not curb Iran’s missile and nuclear tests.

If Trump’s vow to bail out of the Paris agreement is dropped it could redouble his resolve to dump the Iran nuclear deal, another Obama legacy. One of his avenues of attack, already outlined by Haley, will be to argue that the UN nuclear watchdog, the International Atomic Energy Agency (IAEA), is not being assertive enough in inspections of suspect military sites in Iran.

The push for military base inspections, with its echoes of contentious UN meetings in the run-up to the 2003 Iraq invasion, is likely to meet stiff resistance in the security council. Even those capitals which might agree that the IAEA could be more assertive, point to the certain and tangible benefits of the Vienna deal, which has reduced the Iranian stockpile of low-enriched uranium by nearly 99%.

The Israeli prime minister has echoed the US president’s view that there will be ‘no daylight’ between them on issues such as settlements and the Iran deal.

Trita Parsi, the head of the National Iranian American Council, which advocates diplomacy and engagement with Tehran, says Trump is swayed by Netanyahu and the Saudi leadership, who oppose the nuclear deal, not primarily for nuclear-related reasons but because of the recognition it gives Iran’s role as a regional power-broker.

“The perspective of those who didn’t like this deal, is that, at the end of the day, this deal is not just about the Iranian nuclear issue,” Parsi, the author of a book on the deal, Losing an Enemy: Obama, Iran and the Triumph of Diplomacy. “The most important thing is that beyond that, it ended three decades of American policy of containing Iran. It accepted than Iran is a major power in the region.”

Since making Riyadh the destination of his first foreign trip as president, Trump has stuck closely to Saudi side on its disputes with Iran and Qatar, to a degree that has frequently baffled some of his own advisers.

“President Trump himself appears motivated to oppose reflexively nearly all of President Obama’s major agreements,” Nicholas Burns, a former undersecretary of state for political affairs. “That is a major mistake in judgement on his part.”

The desire to obliterate Obama’s mark on history may be something else that Trump and Netanyahu share. The Israeli leader had an acrimonious relationship with Obama, who successfully fended off Netanyahu’s bid to derail the Iran deal in the US Congress two years ago.

“What Netanyahu and Trump have in common, among other things, is their inability to accept criticism, their tendency to turn critics into enemies and their fervent wish to wipe the smile off what they see as Obama’s condescending face,” Israeli commentator Chemi Shalev, wrote in Haaretz on Sunday.

“This is the backdrop to the meeting in New York on Monday between Trump and Netanyahu, the two senior members of the Obama Victims Club, who are both seeking payback by trying to erase his signature foreign policy achievement.”