On the Eve of Israel’s Election, Netanyahu Thanks Trump for Sanctioning Iran at His Request

ON THE EVE of Israel’s election, Prime Minister Benjamin Netanyahu took credit for President Donald Trump’s decision to impose sanctions on Iran’s powerful Islamic Revolutionary Guard Corps, by designating it a foreign terrorist organization.
“Thank you, my dear friend, President Donald Trump,” Netanyahu tweeted in Hebrew, “for answering another one of my important requests.”
As the Telegraph correspondent Raf Sanchez noted, Netanyahu’s choice of words seemed to imply that Trump’s earlier decision to recognize Israeli sovereignty over the Golan Heights, Syrian territory Israel seized by force in 1967, was also a gift given at the request of the embattled Israeli prime minister.
Netanyahu is taking credit for Trump’s decision to designate the Revolutionary Guard as terrorists. “Thank you for responding to another important request of mine,” Bibi says.
He got the Golan 2 weeks ago and now this 1 day before Israel’s election. https://t.co/PAvX22o4Y5
— Raf Sanchez (@rafsanchez) April 8, 2019
One day before Israelis go to the polls, Netanyahu is pulling out all the stops, since he faces both an immediate electoral challenge from Israel’s former military Chief of Staff, Benny Gantz, and the prospect of a post-election indictment on corruption charges.
Joe Dyke, an Agence France-Presse correspondent, pointed out that Netanyahu omitted the claim that Trump’s move was made at his request in a subsequent tweet in English. That left the prime minister open to the charge often leveled at Palestinian leaders by Israelis, that they placate the international community in English and then say something quite different for domestic consumption in their native tongue.
File this one away for the next time an Israeli official says “The Palestinians say one thing in English and another in Arabic” https://t.co/1OjAtWKGCH
— Joe (@joedyke) April 8, 2019
Trump is popular with Israel’s right-leaning, nationalist electorate for a string of concessions to Israeli claims, including the de facto recognition of Israel’s illegal annexation of occupied East Jerusalem as well as the Golan Heights. Netanyahu’s warm relations with the American president have featured heavily in his re-election campaign.
נתניהו – ימין. חזק. pic.twitter.com/Yqj1qkYKHH
— Benjamin Netanyahu (@netanyahu) March 6, 2019
On Sunday, Netanyahu also shared a segment from Fox News in which Sean Hannity called Gantz “his crazy opponent,” for suggesting that Trump was meddling in Israel’s election.
צפו בקטע מתוך תוכנית החדשות הנצפית ביותר בארה״ב.
יועצו הקרוב של נשיא ארה״ב דונלד טראמפ, רודי ג׳וליאני, תוקף את גנץ על כך שתקף את הנשיא טראמפ על שהכיר בריבונות ישראל ברמת הגולן. pic.twitter.com/q1lTu7oPjB
— Benjamin Netanyahu (@netanyahu) April 7, 2019
Soon after Trump’s decision to sanction the Revolutionary Guard Corps was announced, Iran’s foreign minister, Mohammad Javad Zarif, tweetedthat Trump’s action was the result of lobbying by “Netanyahu Firsters,” including John Bolton, who made paid speeches advocating regime change in Iran before he became the national security adviser, and Sheldon Adelson, a financial supporter of both the American president and the Israeli prime minister who once suggested a nuclear strike on Iran would be the best way to start negotiations.

After Netanyahu’s Hebrew-language tweet taking credit for the decision, Zarif tweeted a screenshot of a report from the Israeli press with the letters “Q.E.D.” a Latin phrase used at the end of a mathematical proof, indicating that the truth of a proposition has been demonstrated.
#NetanyahuFirsters who have long agitated for FTO designation of the IRGC fully understand its consequences for US forces in the region. In fact, they seek to drag US into a quagmire on his [email protected] should know better than to be conned into another US disaster. pic.twitter.com/i4bcfgxybT
— Javad Zarif (@JZarif) April 7, 2019
Senior Pentagon and C.I.A. officials opposed Trump’s decision to impose sanctions on the military unit and affiliated companies and individuals, arguing that it would “allow hard-line Iranian officials to justify deadly operations against Americans overseas,” The New York Times reported. Trita Parsi, founder of the National Iranian American Council, offered this as proof that Netanyahu now seems to have more sway over the president’s decisions than his own military and intelligence officials.

Maryam Rajavi, the leader of an Iranian exile group known as the Mujahedeen-e-Khalq, or People’s Mujahedeen — which successfully lobbied to be removed from the official State Department list of Foreign Terrorist Organizations with the help of paid supporters like Bolton — also took credit for the new sanctions against the Revolutionary Guard Corps.
The terrorist designation of the repressive Islamic Revolutionary Guard Corps has been the enduring and the righteous demand of the Iranian people and Resistance and an imperative for regional and global peace and security. #Iran #BlackListIRGC
— Maryam Rajavi (@Maryam_Rajavi) April 8, 2019
Iran retaliated, as the BBC Persian correspondent Bahman Kalbasi noted, by designating The United States Central Command a terrorist organization and naming the U.S. government a supporter of terrorism.
Iran Supreme National Security Council has issued a statement saying it now considers CENTCOM and all the groups affiliated with it as a “terrorist organization” and US Gov. as a supporter of terrorism….good day for warmongers in DC, Tehran, Tel Aviv, as well as UAE/Saudi. https://t.co/vxtWVlZtW7
— Bahman Kalbasi (@BahmanKalbasi) April 8, 2019 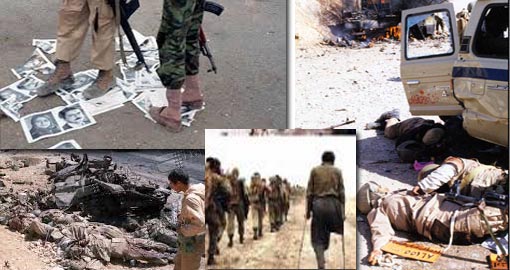 A portrait of “Eternal Light” drawn by an Eye – witness

Mojahedin Khalq Trapped in a State of Limbo 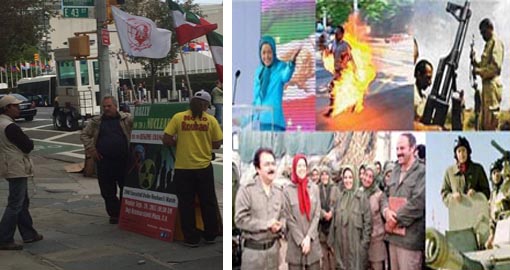 Annual Anti-Iran Terrorist Freak Show Is Back in Town!