In a week when UN Secretary General Antonio Guterres and European Union foreign policy chief Federica Mogherini both delivered considered speeches about the Iran nuclear deal, President Donald Trump’s typical shorthand reference to it as a “bad deal” indicates nothing to the world community other than he hasn’t put the effort in to understand how the deal came about and what it actually says. His apparent ‘policy’ is to abandon it and strike a better deal. But there is no indication how that would come about. The 60 day deadline for Congress to vote to reimpose sanctions passed on December 12. 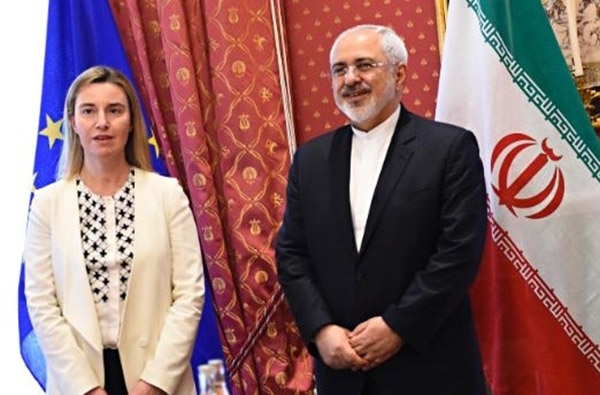 Trump’s foreign policy tweets are now analysed widely by foreign policy wonks as part of a ‘bluff and bluster’ policy of diverting attention away from anything he might have to answer for. Trump’s decision not to certify Iran’s compliance with the agreement in October created uncertainty was not leadership. Instead, a peculiar kind of American weakness is being exposed for all to see.

This has given an opportunity for the European Union to step into the void. The EU is fully united in its support for the nuclear deal. The JCPOA is regarded as a binding commitment, as starting point, on all sides from which to begin to address other outstanding issues.

Those issues include Iran’s missile programme, but also human rights and regional influence.

Currently there is no consensus between the original P5+1 about how to deal with Iran. An unproven allegation by UN ambassador Nikki Haley that Iran supplied ballistic missiles to the Houthis in Yemen might excite the United States and Saudi Arabia but in contrast Russia’s position is that missiles were never part of the JCPOA agreed in July 2016.

While they may have agreed with Europe and America over the nuclear issue, Russia’s military help to Syrian leader Assad alongside Iran puts it at odds with the European and American positions. And China enjoys good trade relations with the EU and Iran and is unlikely to want to disturb this balance for what appear angry ideological rants from America.

The EU, in an effort to bridge and navigate this difficult breach so as to assert the necessary leadership for further negotiations over Iran, has chosen to strike the moral high ground. Essentially, Europeans believe America lacks credibility on human rights because of its support for the death penalty. This applies also to Russia and China. In its dealings with other countries, the EU always raises the issue of human rights asserted Mogherini. The EU leads the world in this respect.

The EU also believes that the nuclear issue is resolved. Iran is complying with its terms and under stringent IAEA inspection Iran will not be able to break out. For this reason, the idea of tearing up an agreement that took twelve years to broker is ludicrous. This would undermine the credibility of the IAEA at a time when it will be needed in future for other nuclear crises, notably North Korea.

The US complaint that other issues – like missiles – were not included is disingenuous. Iran’s starting point for the negotiations was that everything should be on the table. But, when issues such as supplying Saddam Hussein with chemical weapons during the Iran-Iraq war or human rights abuses were mooted as possible points of discussion, it was the US and Gulf countries which objected.

While the US objects to Iran’s involvement in regional conflicts, it is dishonest for its spokespersons to ignore America’s role in the conflicts of Iraq, Syria, Yemen and Israel. European politicians are more bold and honest. In order to be credible and effective in further dealings with Iran, the European Union countries need to distance themselves from any tolerance or support for terrorist groups like Maryam Rajavi’s Mojahedin Khalq which call for violent regime change against Iran. MEP Ana Gomes highlighted a recent security breach linked to Rajavi’s visit to the EU parliament when MEK agents carried out a planned attack against two of their critics at the parliament.

This new found confidence in Europe is in direct contrast to – and probably a consequence of – the dysfunctional and chaotic policy stances issuing from the Trump administration. Lacking any actual policy toward Iran, Trump’s aim appears simply to be as disruptive as possible. In contrast, the European Union has a clearly stated position and has now signalled its intention to take the lead in diplomatic talks aimed at getting Iran engaged in changes to its human rights behaviour and military strategies.