Since February 2016, the Americans have brought around 3000 Iranian Jihadis. This is an Army. The Americans approached Macedonia to take them and Macedonia refused. Americans contacted Romania, but Romania refused. The only country who is ready to remove his pants in front of Americans is Albania. And the Albanians removed their pants. 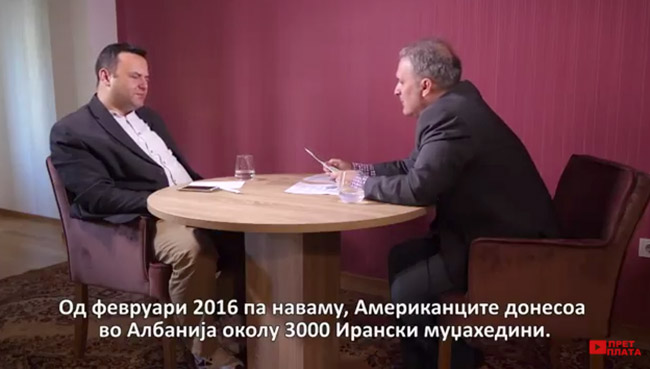 So we have 3000 Iranian Mojahedin Khalq (aka Maryam Rajavi cult or MEK, NCRI, MKO, Saddam’s private army …). They now have two military camps in Albania. One of them is in Tirana and the other one is in Durres. The one in Durres is 32 hectares.

Vasko Eftov is a freelancer journalist from Macedonia. He is editor and host of the political tv program Vo Centar.

Vasko Eftov started to work as a Journalist at the macedonian newspaper Vecer.[1] His first TV show was called Revers and it started to air in 1996, in March 1999 he had an offer from Sitel which he accepted and renamed the show to Vo Centar (English: In Center).[2] The show was aired on Kanal 5 and Alfa. The show was aired and later cancelled from Alsat-M on March 23, 2015 from the Chief editor Muhamed Zakiri.[3] It continued to be aired on Kanal 5.[4] In his job so far he has interviewed: Kiro Gligorov, Branko Crvenkovski, Ljubčo Georgievski, Srgjan Kerim, Stojan Andov, Vlado Bučkovski, Pande Petrovski, Adem Demaci, Ljube Boskovski, Ljubomir Frčkoski, Petre Roman, Zhelyu Zhelev, Bojko Borisov, Miroslav Lazanski, Momir Bulatovic, Vuk Draskovic, Kristijan Golubović, Pieter Feith, Christopher Hill, Jamie Shea, Peter Carington, Alois Mock, Klaus Kinkel, David Owen, Miroslav Lazanski and many others.