The Albanian TV channel, MCN TV interviewed Olsi Jazexhi, the historian. The US Department of State has distanced itself from the Iranian opposition sheltered in Albania, while the Biden administration has been criticized by former representatives of the Trump administration. Olsi jazexhi says he is a researcher on Iran.
In a connection with the MCN TV news studio, he stated that he follows with great interest the role of the Mujahedin_e Khalq in Albania and the adventure of Prime Minister Rama and his ministers to gain points by harboring this former terrorist organization, illegal in our country. 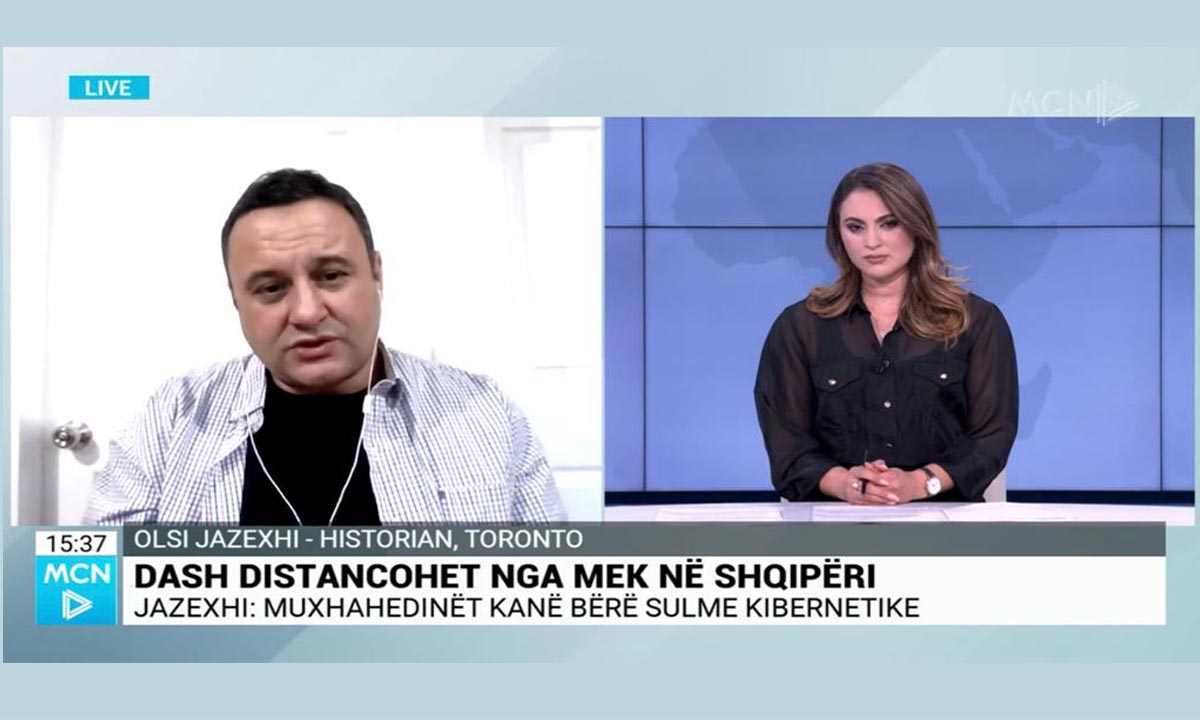 Dr. Jazexhi says:
I have denounced the arrival of the MEK in our country and have warned about the danger that the sheltering of such an organization in our country would bring, which was proven when Albania became a victim of cyberattacks.
There is a difference in the Trump and Biden administrations regarding the Mujahedin that Albania shelters.
The Mujahideen is a terrorist organization and was classified as such by the EU, USA, Canada and Japan until 2013.

But at that time as part of the nuclear agreement that the US made with Iran, the Mujahideen were removed from the terrorism list to take refuge in Albania.
The Iranian diaspora, most of whom support the former Shah of Iran, have sent many letters to the US government regarding the contacts many officials have had with these people.
The Mujahideen are seen as a dangerous, totalitarian cult and that is why the Americans bombed the Mujahideen in 2003 when they attacked Iraq.

The American government has never funded the Mujahideen. The only thing that does, they found Albania where Edi Rama and Pandeli Majko offered themselves to the Americans, so that the socialists could ensure longevity in the government.
Officially, DASH and the US government have been careful to publicly show that they have no connection with this terrorist organization.

While Jazexhi’s name appears in Microsoft’s report on cyber-attacks as a person authorized to convey a public message to the Albanian government that it was exposing the country to Iranian attacks or counteraction, he said that he has read the report and has also written a public response letter Microsoft.
In this report, we show that our duty as journalists and influencers of public opinion is to tell our Albanian society, to warn our country, when our leadership violates the Criminal Code and articles against terrorism and allows our country to return like Afghanistan in the time of the Taliban and Al Qaeda.
I have not been contacted by the Albanian government so far. We have offered our public assistance and expertise to analyze the situation of the Mujahideen.

In Albania, to enter the National Security Council and Parliament, you have to do it with a friend or a bribe.
We want to explain to the Albanian government the danger posed to Albania by the Iranian Mujahideen.
Jazexhi described the issuing of five arrest warrants by the Tirana Prosecutor’s Office, for five IT specialists, under the charge of misuse of duty for cyber attacks.

The accusation raised by prosecutor Bledar Valikaj against IT specialists in some Albanian institutions such as the Ministry of the Interior, was ridiculous.

Specialists are becoming scapegoats to please Edi Rama’s government, that we found the culprits.
They were accused of misuse of duties, inaction because they had not updated their antiviruses.
The prosecutor of the case is the most wrong person in this story!
Bledar Valikaj is the husband of Ermonela Felaj, politician, deputy of the SP and a person sponsored by the Iranian mujahedin.

Supporter of the terrorist organization, has participated in the calls of the Iranian opposition for the violent overthrow of the government organized by the opposition leader Maryam Rajavi.
The first to be questioned is Ermonela Felaj, who is directly responsible for allowing the hacking activity against Iran.

Bledar Valikaj has a conflict of interest because his wife is close to the mujahedin.
There was unprofessionalism in the document, it was said that Albania’s cyber systems were hacked by Iran.
But the Microsoft report does not say that Iran did it, but that it is suspected that Iran did it.
Justice is not based on suspicion, but on evidence. The term that the hacking was done by Iran should have been used.

Albania Caught in the crossfire of cyber conflict