– Where is Albania heading to?
Since Soleimani’s assassination, Albania has been on overdrive to prove its ass licking credentials to Pompeo; left, right and center are praising Pompeo and ranting against Iran. To date, Iran has ignored this. The more silent Iran is… 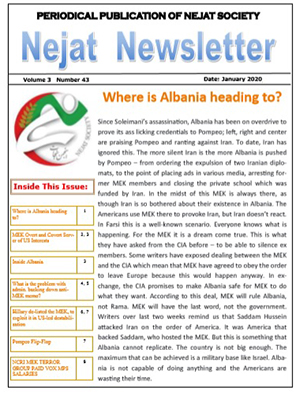 – MEK Overt and Covert Server of US Interests
For those who have been involved with the Mujahedin Khalq Organization (the MKO/ MEK/ PMOI/ Cult of Rajavi) or have studied its background from the early days of its foundation, it is clear that the group was founded as an anti-Imperialist movement against the Shah of Iran, in the 1960s.
“Anti-capitalist, anti-imperialist and anti-American, MEK fighters killed scores of…
– Inside Albania
As far as MEK is concerned, last week they have another three deaths. They have already gone to plan B – just die. Former MEK who live in Albania have written an Open Letter to…
– What is the problem with admin. backing down antiMEK memo?
At lightning speed, the State Department overturns an order prohibiting US diplomats from meeting controversial Iranian dissident groups – including a close friend with Trump World allies and previously designated a terrorist group, the Mujahideen-e-Khalq (MEK) ). The initial memo, lit by a career State Department employee, angered…
– Hillary de-listed the MEK, to exploit it in US-led destabilization
On January 3, 2020, the plane of Qasem Soleimani, major general of the Islamic Revolutionary Guard Corps (IRGC) and commander of its elite Quds Force, arrived at Baghdad International Airport. At the same time, the US MQ-9 Reaper, a prime assassination..
– Pompeo Flip-Flop
Pompeo’s flip flop over contact with militant Iranian exile and opposition groups was reported in various media. After the first directive was made public, James M. Dorsey, Euro-Asia Times concluded that “Mr. Pompeo’s directive is unlikely to persuade Iran that Washington has had a change of heart. Indeed, it hasn’t. Mr. Trump maintains his campaign of..
– NCRI MEK TERROR GROUP PAID VOX MPS SALARIES
… The National Council of Resistance of Iran (NCRI) had an armed wing that was on the United States’ list of terrorist organizations until 2012, a year before the group funded Spain’s ultranationalist party. Founded in Tehran in 1965 by three university students, the organization’s military legion, the Mojahedin-e Khalq (MEK),…