She was twenty years old when she died from brain tumor in a hospital in Cologne, Germany. She was left alone and desperate in the last days of her life. Azar’s death caused tumult against the Mujahedin Khalq Organization (the MKO/ MEK/ PMOI/ NCRI/ Cult of Rajavi). A defector, Mehdi Khoshhal began to write a book about child victims of the MEK following the heartbreaking death of Azar. 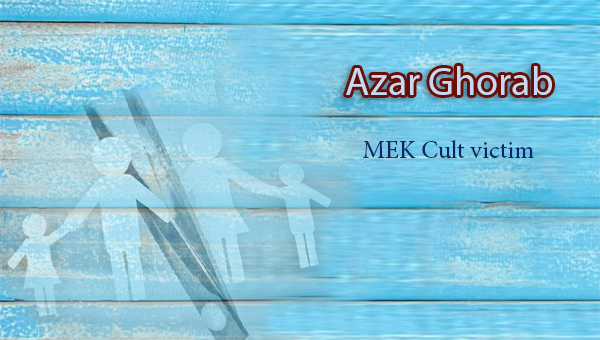 “A number of homeless, orphaned and mentally disordered children are left in the hands of Western societies”, Khoshhal writes about these children. “Some committed suicide due to the sufferings of reminiscence and separation from their families. A finally Azar Ghorab is an instance of those teenagers who had rejected the terrorist MEK’s demand to take her to Iraq so the group was angry with her.”

IN 1991, when Iraq invaded Kuwait, Azar was 7 years old. She and her brother Davood, together with hundreds of other children, were sent to Europe under the order of Rajavi. Her father Habib Ghorab and her mother Masoumeh Ehtesham never saw her until her death, they were both in Iraq fighting for the MEK.

Azar who was no more regarded as the MEK’s Militia was left alone in Germany, she was not supported by the MEK even in the hardest days of her illness. Her boyfriend and his family were the only ones to help her.

After her distressing death, a lot of defectors of the MEK, such as Yasser Ezzati criticized the MEK. This made the MEK to publish a letter allegedly written by Azar’s mother and brother. The letter was not in the memory of Azar but to accuse defectors who supported her of being the agents of the Iranian government.