The news was widely reported in the international media. 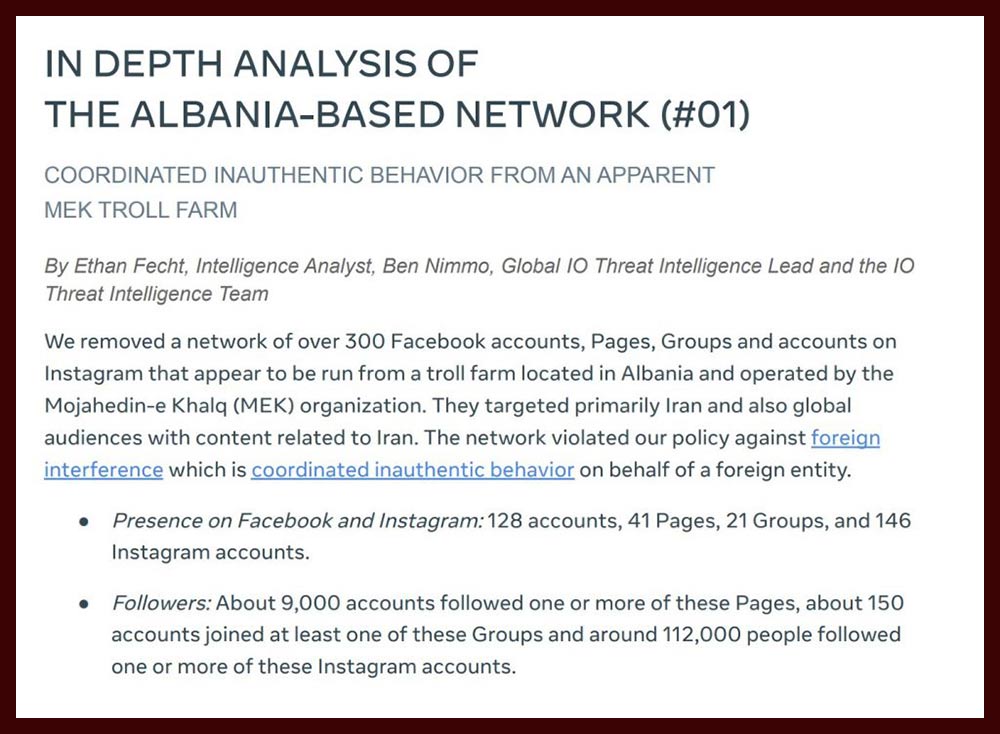 However, it should be noted that according to information obtained from a large number of former members of the Rajavi cult in Albania, which has been reflected in international media in the past couple of years, the MEK cyber unit or troll farm in this country contains 1,500 people, each with about 20 fake accounts in cyberspace which target the peace and security of Iranian society.

The followers of this destructive mind control cult, who are in fact modern slaves, are engaged in producing and spreading rumours and posting misinformation from various accounts against the national interests of the Iranian people all day long, like robots, based on a specific schedule.

Removing 300 fake MEK accounts, after so many years, constitutes only one percent of the actual amount of this type of account operating from Albania.

Last year, on April 22, 2020, The Intercept reported on a fake identity created by the MEK in Albania called “Heshmat Alavi” whose misinformation was quoted by Donald Trump as well as Mike Pompeo against Iran.
https://theintercept.com/2020/04/22/trump-heshmat-alavi-twitter-mek/

The Intercept also reported on June 9, 2019 that Alavi is a composite identity run by a team of MEK members based mainly at the group’s compound in Albania, according to defectors who were involved with managing the account and other sources. The article says:

“Alavi’s articles also mixed criticisms of Iran and U.S. policy with overt advocacy for the MEK. His pieces in the Daily Caller, The Hill, and other outlets — though less numerous than his contributions to Forbes — employed a similar mix of advocacy against the Iranian regime and praise for the MEK. Though the MEK is known to be widely loathed among Iranians, Alavi described the group as the “main Iranian opposition group” in a 2017 Daily Caller article.”

“As the Trump administration continues with its hawkish talk on Iran, we need to look at how that story is being crafted and by whom: Heshmat Alavi was once cited by the White House as a credible commentator on Iran. Shame he doesn’t exist. It turns out he is a fictional persona reportedly created by the Mujahedin-e-Khalq (MEK), a shadowy group opposed to the Iranian government and supported by Washington.”

In this regards The American Conservative in a lengthy article titled ‘Another Opinion Columnist Pushing War with Iran Who Doesn’t Actually Exist’ wrote about this matter on Sep 2, 2020, emphasizing that:

“The list of MEK disinformation tactics also includes fake online since-deleted sites such as PersiaNow and ArabEye and questionable sites such as Iran Focus whose domain was formerly registered under the name of an NCRI spokesperson and is now anonymously held.”

“MEK’s recent influence campaign on Facebook spearheaded by the National Council of Resistance of Iran (NCRI) was recently reported on last year by Lachlan Markey at the Daily Beast. Markey explained how NCRI lobbyist Soheila Aligholi Mayelzadeh has helped place paid ads on Facebook reaching between 500,000 to 1.4 million users as part of the campaign to sway US public opinion in favor of MEK and intervention in Iran.”

“The list of outright fakes recently in the realm of foreign policy analysis is significant: there is the apparent Emirati fabrication Raphael Badani to MEK sock puppet Alavi, first revealed by The Intercept, to deep fake non-existent anti-Palestinian activist Oliver Taylor, whose work was placed at highly-respected publications in the United States and Israel.”

The American Conservative also wrote on January 6, 202I in an article titled ‘Rejecting Regime Change for Good’ that:

“The U.S. government doesn’t understand the countries in question, it relies on bad information that is frequently offered to them by self-serving exiles and activists, and it doesn’t know how to do state-and-institution-building on such a large scale in any case. The U.S. has expended vast resources for decades on some of these policies with remarkably little to show for it, so it is laughable to think that the problem is insufficient resources. There are things that are simply beyond our government’s power. The answer is not to do regime change on the cheap, as the U.S. tried in Libya, but to reject regime change.”

The Independent wrote on June 11, 2019 under the title ‘Heshmat Alavi Gate’ (Trump and MEK):
“The Heshmat Alavi persona had a strong presence on Twitter and harassed Iranian journalists, academics, and activists who are critical of the Mujahedin-e-Khalq organisation, a one-time armed guerilla group now holed up in Albania. There is no known link between the Iran Disinfo programme and the fake persona. At least one was cited by the Trump administration as proof against the effectiveness of the Obama-era nuclear deal. Some of the MEK articles were also picked up by US government funded Voice of America’s Persian-language service.”