Mother of an MEK hostage: They brainwashed my son

Azam Fadai is a heartbroken mother who has not been able to visit her son for twenty years. Her son is a member of the Mujahedin Khalq Organization (MKO/ MEK/ PMOI/ Cult of Rajavi). Majid Hajalirezai, the son of Azam was a soldier of the Iranian army when he was recruited by the Cult of Rajavi.
“We were informed by the garrison commander that Majid had been disappeared two days earlier,” Azam told the audience of Nejat online conference. “After a few days Majid called us and told that he was in Baneh (a town in West of Iran), he said “Pray for me”.”

The MEK recruiters used to call the Hajalirezaiees from time to time giving them contradictory information about Majid. “Once a woman called to say that Majid was in Greece, the other time a man called and said he was in the United States,” Majid’s mother says. Finally, Majid turned out to be in the MEK’s Camp Ashraf, Iraq. 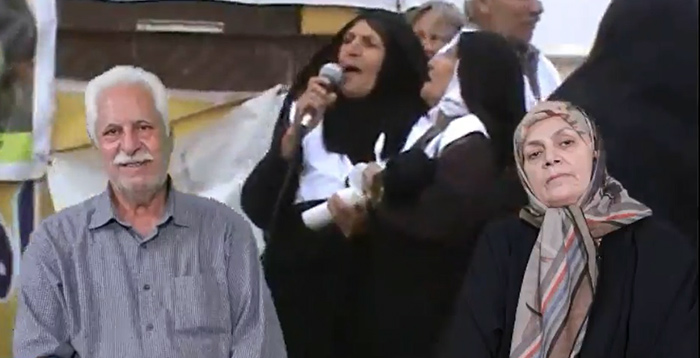 Majid’s parents traveled to Iraq to visit their son. The visits with Majid were strictly supervised by his commanders. In their first visit Majid tried to convince his parents about the authenticity of the so-called struggle he was involved in. In their second visit Majid apparently turned sour when he saw his mother and told her: “Why do you come here every day!?”. The exhausted distressed mother slapped him in the face. “I asked him if he was really my son! Majid loved me but the MEK had brainwashed him. They stole him from me,” Azam Fadai said.
“Maryam Rajavi knows nothing of human rights,” Azam continued. “She does not realize how a mother like me has suffered during these 20 years of separation of my only son. I am fed up. I am mentally and physically sick. I take a lot of tablets every day.”

Majid’s parents and sisters still look forward to the release of their beloved Majid from the Cult of Rajavi. “It not late,” says Azam in the message to her son. “Come back home dear! We receive you whole-heartedly.”

Ramezan Hajalirezai is Majid’s father. He also addressed Nejat online conference. “We went to Iraq four times,” he said. “Every time Majid got darker than the previous time. The last time, we were not even allowed to see him. We were standing in front of the gate of Camp Liberty. MEK agents insulted us and threw rocks against us.”
About the brainwashing system of the Cult of Rajavi he said, “They brainwash people so systematically that, as a 60- to 70-year-old-man, I might be deceived by them. I hope that the hostages of the Cult of Rajavi give up some day and return to their home land. You are loved by the Iranian people. You, the beloveds who have been deceived.”